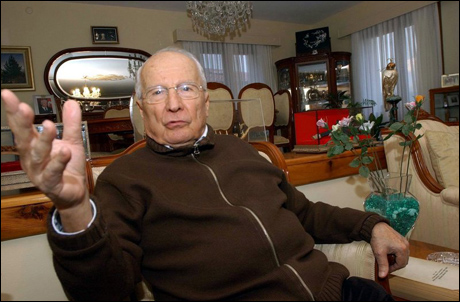 There is a handy little phrase popular among Turks which can be used to explain away anything. People have become accustomed to saying “Burası Türkiye – This is Turkey” whenever something outrageous or ridiculous happens. It is a phrase of complacence, the understanding being that authorities in this country are capable of just about anything.

So when the government tried to outlaw adultery, “This is Turkey” resounded from the country’s restaurant tables. When newspapers publish their annual pictures of a family sacrificing a goat near the Bosphorus bridge, “This is Turkey” is not far off. And when an Istanbul construction company has dug so deep it pierced a metro tunnel? This is Turkey.

But I have to say I was too incredulous to use the phrase when I read yesterday that the chief prosecutor of Muğla, the province on Turkey’s southwestern coast, had ordered an investigation into a recent interview given by former president Kenan Evren. Mr Evren had revealed how, after coming to power in September 1980, he had considered collecting Turkey’s 67 provinces into eight “super provinces”. This would have made for better localised administration, he said, but his plans were scuppered by Turgut Özal, who became prime minister in 1983.

The story was all over the Turkish front pages this week. “Evren wanted an American state system” was Sabah‘s interpretation, although Mr Evren later insisted he used the phrase “regional governorship” and not “state”.

It is likely that Mr Evren will be charged with inciting separatism. He might even face trial. It seems that not even former presidents are free of the recent scourge that has engulfed this country where people are prosecuted for saying what they think. This is Turkey.

Readers of this blog who are familiar with Mr Evren’s illustrious career will note that I have neglected to mention one aspect of his rise to power. Kenan Evren was Chief of the General Staff of the Turkish Armed Forces when they toppled Süleyman Demirel’s government, abolished all party politics and suspended the constitution on September 12th 1980. He ruled as “head of state” for two years, wrote a new constitution and presented it to the public in a referendum. He then installed himself as the country’s seventh president, a post in which he remained until 1989.

Kenan Evren stands accused of unseating a democratically elected government and of uprooting Turkey’s entire political system. It was under him, for instance, that the senate was abolished and a single-chamber system of government was adopted. Many older people have charges that are less material: they accuse him of changing the Turkish way of life forever. From 1980, they say, Turkish people became silent and wary of the impact of their words, even after democracy was restored in 1983. They say Mr Evren spawned a “soulless” post-1980 generation of Turks, a generation that never knew the Turkey of before. A generation that coined the phrase “This is Turkey”.

The 7th president of the Turkish Republic, as he is now styled, has never stood trial for the 1980 coup d’état. Now aged 89, it is unlikely he ever will. But it is beyond satire that such a man could face criminal charges for daring to suggest how the Turkish state should be organised.

It is pointless to simultaneously defend his right to speak his mind and demand his trial for crimes as a soldier. But one observation must be made: there is an ingrained understanding in Turkey that a conflicting thought is a dangerous one. Not even a CV that reads “Absolute power, 1980 – 1983” can save you from the consequences. And I’m not sure that’s a good thing.