It is two months since the first Gezi Park protests broke out. This morning’s Cumhuriyet recounts the casualties: five dead, eleven blinded, 106 with head traumas and 63 people seriously injured. Although the protests continue, notably in Antakya last week, there is no doubting the protests have died down.

It is quite clear that Prime Minister Recep Tayyip Erdoğan and his governing AK party have embraced what The Economist astutely described as “democratic majoritarianism”, the view that electoral might always makes you right. Three consecutive terms, a 50% victory at the last election and an opinion poll lead that was curbed but not shaken by the Gezi Park incidents all point to the government’s enduring legitimacy, AK supporters say. 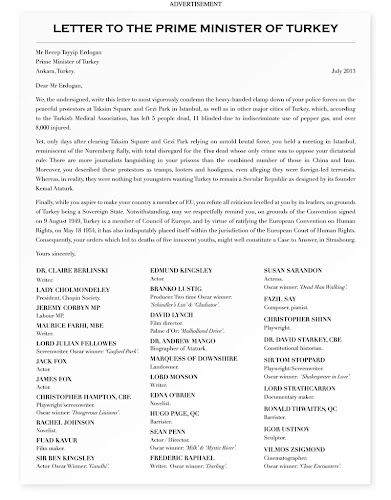 But Mr Erdoğan most recently reacted to a recent full-page advertisement in The Times, taken out by actors and intellectuals including James in Turkey friend Claire Berlinski, by threatening to sue the newspaper. It demonstrates an extraordinary lack of tolerance and an inability to understand why people disagree with him. Simply put, Mr Erdoğan is losing touch.

But the PM still enjoys popular support and has not been afraid to show it. He has called supporters to AK rallies across the country – unhelpfully compared by the Times letter to Nuremberg – and gleefully trumpeted opinion polling, which has consistently shown a solid lead for his party, even for next year’s local elections.

Once again, the question is how to beat the behemoth at that election. Gökçe Fırat, writing in the left-wing newspaper Türksolu, thinks he has the answer.

“It has now become unacceptable in these [post-Gezi Park] circumstances,” he writes, “for the opposition to be divided into two or more factions.

“That is why the AKP must lose at this local election, or at least be seriously hurt by it.

Mr Fırat’s solution to defeating the government is a simple one: an electoral pact in Turkey’s two largest cities, Istanbul and Ankara. In Istanbul, the MHP would not stand a candidate in Istanbul, instead supporting the CHP. In Ankara, the CHP would return the favour by backing the MHP candidate against the AK party.

A look at the last election result – in 2009 – suggests this could work. The mayoral race in Istanbul was a heated, two-horse affair with the AK incumbent Kadir Topbaş narrowly defeating the CHP’s Kemal Kılıçdaroğlu. Much as the London or Parisian mayoral races draw nationwide attention, the Istanbul contest gripped Turkey in 2009, and there is every reason for this to happen again. That time the two top candidates took four-fifths of the overall vote, while the MHP candidate came third with just five percent. This time, Mr Fırat argues, an MHP endorsement could sway the result against AK.

Ankara, on the other hand, has had the same mayor since 1994: the Twitter lawsuit-friendly Melih Gökçek. Adored in the city’s populous north and despised in secular Çankaya to the south, he is far more a divisive figure than Mr Topbaş. He hasn’t said whether he will run for an unprecedented fifth term but the numbers stack up in his favour. If he runs, he would be the candidate to beat – but an anti-AKP consensus candidate could do it.

“Neither political party would look upon the pact as their having lost a potential council,” Mr Fırat writes, “Instead, both parties would win two councils they did not previously hold.

“Most importantly, the AKP will lose its core voter base when these two councils go. I am not even speaking of the psychological effect this defeat would have on Turkish politics: such a pact would unleash a huge amount of energy for the two [opposition] parties.”

Unfortunately for Mr Fırat, it is not as straightforward as he makes out.

First, there is no guarantee the 2009 numbers will replay themselves in 2014. The Istanbul race was indeed close, but this was largely down to Mr Kılıçdaroğlu’s confident and energetic campaign. He has since become his party’s leader and, under a different candidate, the gap could be wider.

Second, a joint mayoral ticket does not mean the withdrawing party will stop campaigning in the city entirely. There are still assembly seats up for grabs, as well as smaller district councils such as Çankaya, a CHP stronghold in Ankara it would never relinquish and would presumably fight an MHP candidate for.

Third, there is no guarantee MHP voters would follow their party’s endorsement. Although AK Party antipathy is very strong among the CHP, the same cannot be said for nationalist MHP folk, many of whom feel far closer to Prime Minister Recep Tayyip Erdoğan than Mr Kılıçdaroğlu (Metropoll survey, June 2013) and more likely to be supportive of government policies than supporters of other opposition parties (Genar, January 2013).

That said, there are hints that MHP supporters are looking to vote elsewhere: the Metropoll survey found less than half (49%) of MHP voters were likely to support their party in a future election, the lowest among all the major parties. Mr Erdoğan upped his nationalist rhetoric during the 2011 general election campaign in an attempt to court this contingent and push the MHP under the electoral threshold, out of parliament. He succeeded at least in lowering the party’s support; more MHP supporters could flee in 2014.

The man who can swing things could be Mustafa Sarıgül, the left wing, independent mayor of Istanbul’s Beyoğlu district. 53% percent of MHP voters believe he should establish a partyy of his own and 37% say they would vote for it. A mayoral bid from Mr Sarıgül on the CHP ticket could do the trick.

The fourth problem with Mr Fırat’s thesis – and this, alas, is the clincher – is that it is an implausible alliance. The CHP and MHP leadership operate on opposite ends of the political spectrum: the former social democratic, the latter nationalistic. They differ hugely on areas of policy: for example, the CHP has backed the principle of Kurdish peace, criticising only the government’s handling of the process, while the MHP has condemned the whole process.

Even on the Gezi Park protests, the MHP chose to defend the police – a key voter base – as simply following government orders, while the CHP praised the “spirit and courage” of the demonstrators. The two parties are so far apart, it is little wonder that MHP voters feel they have more in common with AK.

Turkey’s opposition needs to learn that clever electoral mathematics will not cut it. To defeat the AK, parties like the CHP and MHP need to attract AK voters. Kemal Kılıçdaroğlu’s statement this week that the Prophet Muhammad was the world’s “greatest revolutionary” may have been step in that direction. We shall have to see whether or not it was a part of a strategy.