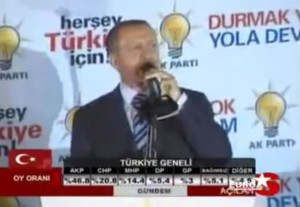 There are two significant alterations: AK have gained an extra seat at the expense of an independent in the far southeastern town of Hakkari. The race there was already very close, and it seems that the expatriate vote tipped the balance in the government’s favour.

Also, the MHP have lost a seat after one their elected MPs was killed in a road accident while on his way to collect his seals of office. The Commission decided his seat should remain empty, rather than going to the next candidate on the MHP list.

That concludes Turkey’s 16th general election. AK now have 341 seats, while the CHP has 112 and the MHP 70. Coverage of the result has been wide and varied; it takes no more than a couple of clicks to read analyses of how it has been a statement against the army, or against the secular establishment, or the end of Turkey as we know it. One particularly amusing column in the New York Post seems to think the Turkish people have willingly ushered in the Middle Ages. Fair enough – but does anyone know if I can still get a mortgage on my straw hut?

I think we’ve all have enough of analysis and nayesaying. It’s now time to look forward. With the results confirmed, parliament will be sworn in on Saturday. Work will begin at once, and there’s plenty to be done. So for those who are interested, and indeed those who are not, here’s my unofficial, unadulterated take on what to expect over the next few weeks:

This is what triggered elections in the first place, and once parliament is sworn in and a new speaker eleted, this will be the first item on the agenda. Abdullah Gül, the AK party’s candidate, has indicated he will stand again, and Deniz Baykal’s CHP has reiterated they will not support him. But a repeat of April’s 367 scenario seems unlikely, now that the MHP has indicated it will attend the vote.

There is, however, hope of compromise. Prime Minister Recep Tayyip Erdoğan has said he will be visiting each leader individually – including Mr Baykal – to discuss candidates. The most likely outcomes seems to be Mr Gül’s election as president.

A new constitution for Turkey, crafted by civilian leaders rather than military chiefs, appeared in both AK’s and the MHP’s manifestos, and it seems work is underway already. It’s looking interesting: a lot of AK’s proposals seem to involve reducing the influence of state bodies among each other. They want to largely cut the president’s powers of appointment and allow his other decrees to be answerable in court.

There are proposals to further reduce the military’s influence over state affairs: the National Security Council of military chiefs, for instance, would cease to be a constitutional body, and the Supreme Military Court would be regulated by the civilian courts, not the army. There are also plans to abolish mandatory religion lessons in schools.

These are all, of course, unanounced AK proposals, and will be discussed in parliament and the media before being put to any kind of vote, but it is very much work in progress.

There are very real fears, now that the election is over, that Turkish troops will be sent into northern Iraq to clear out suspected PKK positions. There have been mutterings over the last few days of a joint US-Iraqi mission in the region, but that hasn’t stopped fatal bomb attacks in the southeast. Patience is wearing ever more thin.

Portugal, currently holding the European Union rotating presidency, has made it one of its principal targets to put talks with Turkey back on track. It will culminate, as it has over the last couple of years, in a summit at the end of December that will assess Turkey’s progress and decide whether to plod on.

Mr Erdoğan has already said that EU-oriented reforms will continue; now, with a stable majority and several years until the next election, he has the security to sell the EU to increasingly sceptical Turkish public. But the scepticism is not restricted to these shores: the anti-Turkey lobby in the EU has found new voice in French president Nicholas Sarkozy. He has indicated he wants to use this December’s summit to divert the EU’s relationship with Turkey to something short of membership.

Despite his refusal to resign, Deniz Baykal’s position as leader of the CHP is looking shaky. Routine leadership elections are due at a party conference in the Autumn, and the arid Mustafa Sarıgül, mayor of a district in Istanbul, has said he will stand against him. There is also a growing resistance movement led by former parliament speaker Hikmet Çetin.

But it is not just about failing leaders. The Turkish political landscape remains dangerously segregated, with entrenched splits on the left, right and centre. There will need to be some drastic restructuring if the AK party is to be challenged.

These are just a few of the items on a busy summer agenda for Turkey. The country is open for business again. That can only be good news.