As the final opinion polls are published, JamesInTurkey.com makes its first calls for the Turkish general election

As the final opinion polls are published, JamesInTurkey.com makes its first calls for the Turkish general election

We have reached a watershed in Turkey’s election campaign: as of today, opinion polls are banned.

For the next ten days the electorate will be shielded from the perceived influence of voting intention surveys and left free to make their own minds up.

Political parties and independent candidates, however, can still campaign until the night before election day, and the polling ban doesn’t appear to cover websites, but I’ll discuss that more in a moment.

The ban is, nonetheless, a good opportunity to round up the latest opinion polls, update our rolling average and take a general look at the state of the parties.

There were two polls released yesterday – from Gezici and AKAM – that both placed the governing AK Party below 40% and the pro-Kurdish HDP firmly above the 10% electoral threshold.

Today’s average is one of records: the lowest AK Party share, the highest CHP and HDP shares and the joint highest MHP result. As always, details on how it is calculated is available here.

Let’s put the rolling averages in context by looking comparing them to the last general election result in 2011. 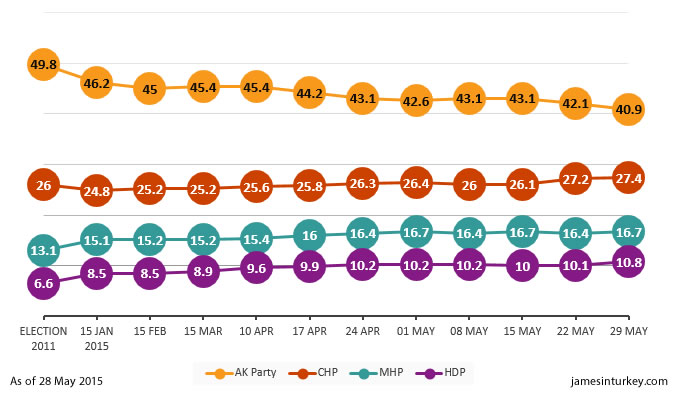 At this stage of the campaign, here are our predictions for the election:

1. AK Party votes have declined since the last election, but it will still win: don’t forget every opinion poll since 2011 has shown an AK Party lead

2. No significant change for the CHP, be it up or down. The difference between our rolling average’s 27.4% finds and the 26% the party won in 2011 to conclude it will do significantly better.

3. Support for the MHP has risen and the party will be a comfortable third, its 2011 worries of falling short of the 10% threshold long forgotten.

4. The HDP is likelier than ever to cross the threshold, but is too close to the 10% mark for comfort.

But let me add a qualifier: the election campaign is far from over, and anything can still happen in the next ten days. The only difference is we will have fewer polls to work with.

I say fewer polls, not none, because there is some confusion over whether polls are entirely banned.

It’s certainly true that newspapers and broadcasters cannot cover polling results any longer – the rules of Turkey’s Supreme Electoral Commission (YSK) are quite clear on that – but the rules are somewhat hazier when it comes to websites.

Here’s my translation of a YSK ruling, passed on 23 February 2015, which set out the campaigning rules for this election:

The broadcast/publication [Turkish: yayın] and distribution through the written, oral and visual press & broadcast media of

in support of or in opposition to one political party or candidate, or in a manner that can influence a citizen’s vote, will be prohibited in the ten days preceding election day (from 28 May 2015 to 6pm on Saturday 6 June 2015).

Two points on this. First, it appears to suggest that opinion polls might be acceptable so long as they are utterly neutral and do not appear to endorse or oppose any candidate.

Second, it makes no mention of publication on the internet, even though websites are mentioned quite clearly elsewhere in the document. Some have already taken advantage of the apparent loophole – the ORC polling company, for example.

So we’re not at the end of polling season yet, but expect new surveys to dry up in these last few days of the campaign.