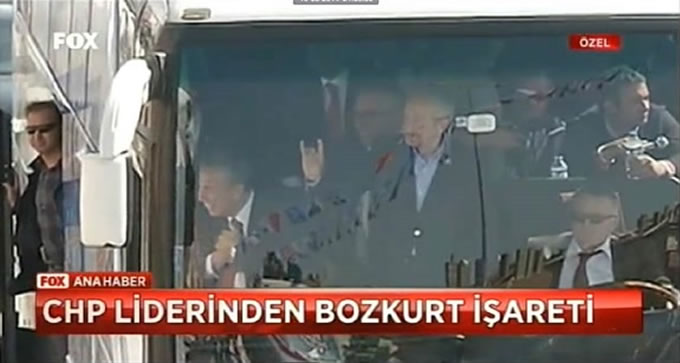 The leader of Turkey’s main opposition party has earned plaudits and condemnation alike arguing that the Syrians hosted by Turkey should be sent home.

The refugees are making it hard for ordinary Turkish citizens to find work because they undercut wages, he says, and a Republican People’s Party (CHP) government would send them home, where they will be more comfortable. Rather audaciously, he claims a CHP government would do what no-one else has managed so far and secure peace between the warring sides in Syria, thus ensuring the refugees aren’t sent back to a warzone.

But the CHP leader has been testing the water on this stance as early as February, when he that his government would bring peace to the Middle East and send home the 1.7 million Syrian refugees living in Turkey.

He tolda meeting of his party’s parliamentary group meeting about how the 250,000 refugees living in Şanlıurfa province under Turkish salaries: “People in Şanlıurfa are hungry and paying the price. No-one in Şanlıurfa wants to be involved in Syria’s internal affairs.

“And I will tell my Syrian siblings, those 1.7 million siblings, ‘Go, my siblings’, return to your fatherland. We will offer you all kind of assistance. We have spent 5.5 billion dollars on you so far, we do not regret it, but peace has come to Syria with a CHP government, so go and work in your own country.”

Not an isolated incident

It’s a tone that Mr Kılıçdaroğlu has repeated at more recent campaign stops.

“We will send our Syrian siblings back home”, he told a meeting of businessmen in the southern town of Mersin yesterday to rapturous applause. “Every person is happier living on the lands where they were born, in their own country.”

So why does Mr Kılıçdaroğlu appear to be playing the race card with Syrian refugees? It partly comes down to interpretation.

@Meralink We are interpreting this differently. I think he exploiting belief that these refugees are traitors for not returning home. — Has Avrat (@hasavrat) April 23, 2015

@hasavrat yes we are interpreting totally differently, I can see nowhere any implication of “treason”.

Make no mistake, Mr Kılıçdaroğlu’s words are very carefully chosen. But is he necessarily xenophobic?

He doesn’t want to kick out Syrian refugees on the first day of a CHP government, but he isn’t uncomfortable with people thinking otherwise. That’s clear from the scant objections to the countless news stories online offering some variation on the “Kılıçdaroğlu: We will send the Syrians home” headline.

What’s more, the applause he got in the Mersin auditorium shows it’s a popular policy in the parts of Turkey that have played host to Syrians since the civil war broke out.

It all feels like a calculated nationalist tinge to the party’s campaign strategy. That said, the CHP leader does have a track record in small-scale nationalist campaigning. He made headlines ahead of last year’s local elections when a camera caught him making the “Grey wolves” gesture, which is popularly associated with supporters of the nationalist MHP.