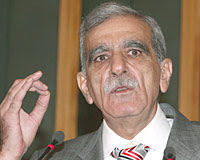 Should the jailed leader of the PKK be given an honorific?

Should the jailed leader of the PKK be given an honorific?

The leader of the predominantly Kurdish Democratic Society Party (DTP) was sentenced to six months imprisonment today for calling the leader of the PKK “Mr Öcalan”. Ahmet Türk used the title repeatedly during a speech he gave in January; the court in Diyarbakır ruled that this was “praise of a crime and a criminal” under the Turkish penal code, and that his position as a party leader meant that his words had added gravitas.

The punishment is harsh and overblown. Ahmet Türk does not deserve to go to prison for giving Abdullah Öcalan a courtesy title. But that does not make him right. Öcalan is a criminal, tried under Turkish law, serving a life sentence on the island of İmralı. He deserves a title no more than Hermann Göring or Saddam Hussein.

Dropping titles for convicted criminals is a convention that news outlets in the West tend to follow. The BBC’s styleguide says on the matter: “In criminal cases, a defendant is Guy Fawkes or Mr Fawkes until any conviction, when he becomes Fawkes”.

Which makes it all the more annoying when pieces like this appear on the BBC News website. This is a separate story concerning Öcalan – rumours about his health – written by the BBC’s correspondent in Istanbul, Sarah Rainsford, and she will keep referring to Öcalan as “Mr”.

It’s worth thinking for a moment why. I would love to dismiss it as a careless mistake but she, like Ahmet Türk, uses the phrase “Mr Öcalan” repeatedly. Perhaps the BBC is not dropping the title because of the international controversy surrounding Öcalan’s trial. “The trial was not fair and conclusive,” it could be argued. And in a way, they would be right. But if you don’t trust the Turkish judgement, trust the European one: the Council of Europe ruled only a matter of months ago that Öcalan did not need a retrial.

But even that argument is redundant for the BBC, as this story reporting Ahmet Türk’s conviction demonstrates. Not a “Mr Öcalan” in sight. So it seems the Rainsford story is an isolated incident.

Both Sarah Rainsford and Ahmet Türk are wrong. Neither should be punished. But that doesn’t follow through for Turkey’s nationalists. They are, after all, the greatest pedants of all.