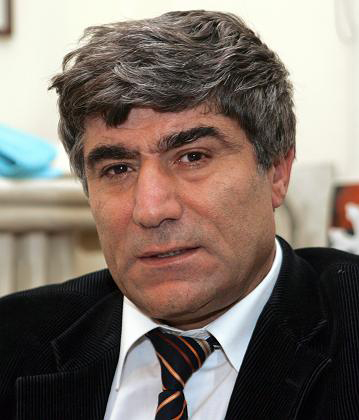 I was in London when I found out. Having emerged from the cellular blackout of the London Underground, my phone beeped back into life with a voice message. “Call me back as soon as you get this,” said an urgent voice. It was my friend in Ankara. “They’ve shot Hrant Dink. He’s dead.” I called her back and she told me what little she knew: “It was apparently some boy. Eighteen, maybe nineteen years old. He died instantly.”

I had to hang up and continue my tube journey. Frustrated and away from a computer, I sat twiddling my thumbs. I needed to write. So I wrote this, with a pen I found in my pocket, on the back of the London Underground Customer Charter. It was the only piece of paper I could get my hands on. I had to record my utter disgust and revulsion somewhere. A man was shot today for speaking aloud. It is an incredible tragedy, and I’m desperate that people know that.

Hrant Dink was a journalist. He was a Turkish citizen. His origins, however, were Armenian. He was among the first to be tried under Article 301, that notorious clause in the Turkish penal code that makes it a crime to denigrate “Turkishness”. Like Orhan Pamuk, the nobel laureate, Dink too faced trial for his thoughts. Unlike Mr Pamuk, Dink was found guilty. The court gave him a deferred six month prison sentence.

Turkish prime minister Recep Tayyip Erdoğan today said it was significant Dink was targeted. “A bullet has been fired at democracy and freedom of expression,” he said. “Our nation, most particularly our citizens of Armenian origin, have the sense and forethought to overcome this test.”

The Nationalist Action Party (MHP) made just a written statement calling for the Turkish people to not be provoked by the incident. “We invite (all) to behave with the utmost responsibility.”

I am angry. I am angry because there are people out there who seem to think it is perfectly justified to kill a man who speaks contrary views. I have a perfectly clear idea of who I think is responsible, but there is little use in churning out conspiracy theories now. Suffice to point out that it was in a crowded street, on a busy morning. This was no impulsive killing.