Tentatively, cautiously, we can say that Turkey is dropping talk of reinstating capital punishment

Tentatively, cautiously, we can say that Turkey is dropping talk of reinstating capital punishment

There are very few aspects of the 15 July coup attempt in Turkey that did not cause alarm abroad, but one that resonated more than most was the talk of reinstating the death penalty.

It began the morning after the night before, with a call that rippled among the jubilant, flag-waving, “God is great”-shouting crowds. “We want the death penalty,” they chanted over and again.

All of a sudden, Turkish commentators and politicians were talking of a “crime of treason” that warranted the reinstatement of the death penalty.

The press carried interviews with parents of police officers killed in action, demanding the ultimate punishment as justice for their children.

ORC, a polling company close to the government, found 91.5% of respondents would support implementing the death penalty “in crimes of treason and terrorism”. 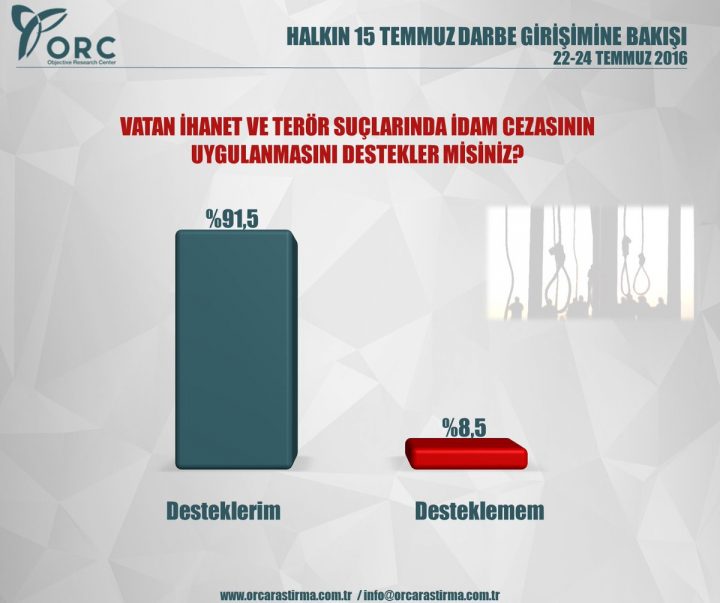 And President Erdoğan told CNN that he would sign a reinstatement of the death penalty if parliament voted for it.

The reaction from outside the country was precisely the opposite: the European Union, the White House and Amnesty International were among those warning the implications of reintroducing capital punishment would be grave.

But two-and-a-half weeks after the failed coup, the indications are that the governing AK Party is not going to propose reinstating the death penalty.

The first real signs came at the weekend when AK Party deputy leader Hayati Yazıcı told Habertürk that stripping the coup plotters of their Turkish citizenship could be alternative to the death penalty.

Yazıcı acknowledged the public demand for capital punishment during the interview but pointed to the multitude of international treaties that his country was a signatory to.

Bringing back the noose would mean pulling out of international commitments like protocol 13 of the European Convention of Human Rights, whereas stripping people of their citizenship and rendering them stateless is less tricky – according to Watson Institute scholar Selim Sazak.

@jamesinturkey Turkey agrees on the definition but not on a legal duty for non-withdrawal of citizenship to prevent statelessness, it seems.

Earlier today, Monday, Mr Yıldırım held separate talks with Kemal Kılıçdaroğlu, leader of the main opposition CHP, and nationalist MHP leader Devlet Bahçeli. The issue of capital punishment was not discussed, the prime minister told the press after the meetings.

Any reinstatement, despite vociferous MHP support, cannot pass without the governing party’s backing. And there is little sign of the other opposition parties supporting it: Mr Kılıçdaroğlu has been carefully non-committal on the issue in his public remarks, while Selahattin Demirtaş and the pro-Kurdish HDP are vehemently opposed.

It may well be that Mr Yazıcı’s comments were a test balloon sent up over the weekend before Mr Yıldırım’s meetings today.

It may well be that the issue will fizzle once again into obscurity.

Indeed, few had discussed the death penalty since it was firmly abolished a decade ago – the most prominent exception being a minister in response to the brutal murder of a young woman early last year.

It has been fifteen years since Turkey’s last coalition government started the process of abolishing capital punishment.

The first step was a vast 36-article package of amendments to the constitution passed on 3 October 2001. Number 15 among these articles was one that amended the constitution to restrict the death penalty to instances of “war, the imminent threat of war and terror offences”.

It did pass (383 in favour; 74 opposed; 8 abstentions, invalid and blank votes), but fewer MPs supported it and more MPs opposed it than almost any other article in the package.

Even so, a law that appears monumental in retrospect stirred barely any emotion at the time. Parliament and the press were more concerned about simultaneous efforts to lift the political bans on religious leader Necmettin Erbakan and the leader of the newly-formed AK Party, one Recep Tayyip Erdoğan. Neither ban was lifted then.

The 2001 law change meant Turkish courts could no longer sentence defendants to death in peace time, but it did not change the status of 86 people waiting on death row.

That came the following year, on 3 August 2002, when parliament voted by a far narrower majority (253 in favour; 152 opposed; 6 abstentions and others) to approve a law that converted all existing death sentences to multiple life sentences.

PKK leader Abdullah Öcalan and Sırrı Sakık, a commander with the group, were among those affected.

Devlet Bahçeli’s nationalist MHP – then a partner in the governing coalition – opposed the law, as did a significant part of the fledgling AK Party.

In a general election precisely three months later, the electorate would boot the MHP out of parliament and replace them with a landslide AK majority.

That AK government went on to sign Protocol 13 of the European Convention of Human Rights, which bans the death penalty “in all circumstances, including for crimes committed in times of war and imminent threat of war”, on 9 January 2004. Parliament ratified it two years later.