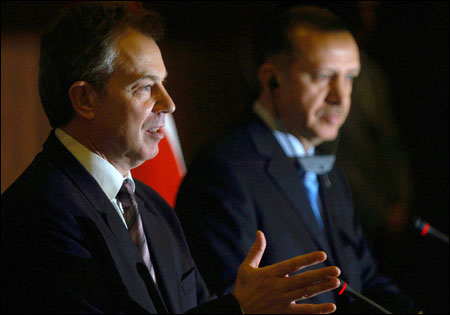 How skipping Antalya could help solve the Cyprus problem 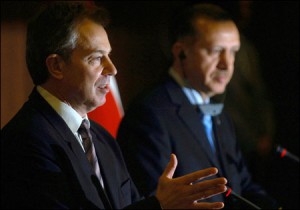 Tony Blair was in Ankara yesterday to offer Britain’s support at a time when Recep Tayyip Erdoğan’s case for Turkey’s EU membership has never looked quite as bleak. The visit came as the EU confirmed eight chapters of Turkey’s entry negotiations would be suspended in response to Turkey’s staunch refusal to open up to Cyprus. There is little hope of those chapters – or indeed of other unrelated topics, such as Education and culture – being opened anytime soon.

Mr Erdoğan needed a boost in the face of growing EU antagonism at home, and that boost came in the form of a direct acknowledgement from Mr Blair that Britain was looking into – and had therefore not automatically rejected – a Cyprus Turkish Airlines request to fly directly to the UK. Mr Blair said he personally supported the idea, and that they were looking into the legalities of starting direct flights.

As it stands, the only planes flying out of Ercan Airport go to Turkey. There are flights to places such as Britain and Germany, but these legally have to call at a Turkish airport – usually Antalya – before proceeding on to their final destination. Save a few token flights to Azerbaijan, there have been no other flights out of North Cyprus since the trade embargo was first placed in the 1970s.

Tourism is Northern Cyprus’s largest source of income – even now, when the only route of entry is via Turkey, it overtakes agriculture. This was the principal reason behind Turkey’s insistence on opening more than just a single seaport in the north: it is, after all, far easier to bring the tourists in by air.

If Britain’s civil aviation authorities approve the Turkish Cypriot request, it would start the first direct flights between North Cyprus and Europe in decades. It would pre-empt an EU review of Northern Cyprus planned for the end of January, which looks likely to be vetoed by the (Greek) Cypriot government. It would give a much-needed injection of cash at a time when even EU aid is set to be derailed by a southern veto.

But perhaps most importantly of all, it would demonstrate to the EU that the Cypriot issue is not one that can be solved merely by enforcing existing treaties a month before a summit deadline. It would show that a dedicated push – perhaps the efforts of an entire six-month presidency – is needed to solve the Cyprus issue once and for all.

The next rotating president is Germany, whose foreign minister Frank-Walter Steinmeier has promised to personally involve himself in the Cyprus issue. He says he is hopeful the problem can solved by June. His optimism provides little reassurance, but what else can be done but hope?