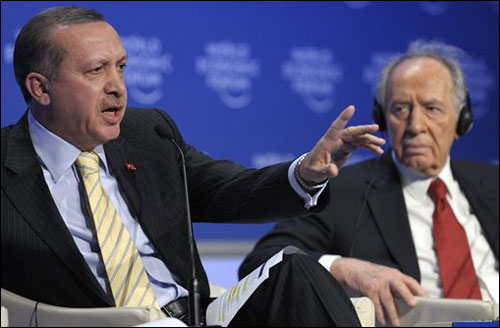 Recep Tayyip Erdoğan has never been the darling of the Jewish community, but his latest comments at a UN meeting in Vienna on Wednesday will not help his reputation. The prime minister was reported as saying:

The prime minister’s use of Zionism in a list of crimes against humanity has drawn condemnation from Israel and criticism from the United States. The translation above – which you will notice differs slightly from the one used by Reuters here – is my own based on the Turkish words quoted by the BBC.

I haven’t yet come across video or audio footage of the remarks, so I can’t study his inflection. However, based on the Turkish words attributed to him it seems to me he was speaking off the cuff. It comes across as the words of someone trying to put together a list of three that would reinforce a point in an argument – in this case, that Islamaphobia should be a crime against humanity – rather than someone singling out Zionism as one such crime.

Perhaps that’s why the United Nations statement condemning Mr Erdoğan’s comments carried a proviso: “if the comment about Zionism was interpreted correctly.”

It is – at best – a very clumsy use of language. It destroys the legitimate point about Islamaphobia he was trying to make. It is also quite in keeping with the prime minister’s character: he may well be a shrewd political operator and the most popular Turkish leader since Ataturk, but he can’t half put his foot in his mouth.

For evidence, if you needed any, consider the prime minister on British press freedom. Or abortion.

But his rhetoric can also be masterful. Take any of his famous speeches from the balcony of his AK Party headquarters following an election victory. Or when he called on Egyptian president Hosni Mubarak to step down. Or, yes, when he criticised a culture association in Eskişehir for displaying an anti-Semitic poster.

There is no doubt Mr Erdoğan is an ardent critic of Israel and an equally vocal opponent of Zionism as an ideology. But unlike his former mentor Necmettin Erbakan, he does not frequently cite Zionism as “an evil” in his speeches. And it is important to remember that although relations between Turkey and Israel are at historic lows today, they did not reach that stage immediately after Mr Erdoğan came to power: the two countries had perfectly cordial relations until events in Gaza and on board the Mavi Marmara took hold. Turkish-Israel relations stopped far sooner at the start of the ill-fated Erbakan premiership.

The trouble is that the Recep Tayyip Erdoğan’s best speeches come when they are scripted and carefully considered. It is when he goes off the autocue that he becomes a liability.

But will he apologise? Don’t bank on it.