This blog has spent an awfully long time waiting for a supposed Islamic revolution. Where is it?

byJamesInTurkey.com
3 minute read
Cumhuriyet’s campaign: Are you aware of the danger?
Total
0
Shares
0
0

This blog has spent an awfully long time waiting for a supposed Islamic revolution. Where is it?

Anyone who happened to see a copy of Cumhuriyet this morning will have seen the paper has relaunched its advertising campaign of a year ago. The paper’s name translates literally as “Republic”; the slogan they’ve recycled for their latest push for more readers is “Are you aware of the danger? Own up to your Republic!” A clever pun, you see.

Last year they wrote it backwards in a green font that resembled Arabic (see above). This time around, they opted for a bog standard sans serif instead. “1881 – 2007”, it reads. “The May 2007 Presidential election is taking place. Are you aware of the danger?” 1881 was the year Kemal Atatürk, founder of modern Turkey, was born.

Both versions, of course, allude to the perceived threat to secularism. It’s not much of a campaign: Cumhuriyet’s circulation hardly budged from its usual 60,000 during the Arabic phase last year, and this year is no different. They’re not getting the readers. It’s not exactly the Great Moon Hoax, is it?

Prime Minister Recep Tayyip Erdoğan’s AKP is on the verge of launching an Islamic revolution in Turkey. They will begin, god protect us, by installing one of their number as the new President. Then, before we know it, our alcohol will be outlawed and our women will all be forced into headscarves. That at least is what a large part of Cumhuriyet’s target audience would have us believe.

I can’t begin to count the number of people who believe a coup is nigh for Turkey. “If (parliament speaker Bülent) Arınç becomes President, the tanks will start rolling…..guaranteed.” was the textbook comment from an anonymous reader in this blog a few weeks ago. Many have the same prognosis for an Erdoğan presidency too.

I have spent an awfully long time waiting for that Islamic revolution. Surely it must be soon that my place of work becomes legally obliged to operate minibus services to my local mosque, five times a day? And the day of rest should be switched back to Friday, like in all proper countries, yes? Oh, and is it not about time that we bring a healthy spot of polygamy back into marriage?

If that’s the AKP’s secret agenda, they’re doing a good job of hiding it. Turkey has had plenty of things to distract itself with since 2002 – an economy in dire need of reform, a war on its southeastern doorstep, and a huge, corrupt state network made up of bureaucrats, soldiers and mafiosa. And on top of having all that, there has been the start of talks with a supranational bloc that has brought Turkey closer to the West than Atatürk could have possibly dreamed.

But if the Islamic revolution is upon us, but the voters certainly don’t seem to care. The latest SONAR poll gives the AKP a 28.26 percent share of the vote. The main opposition CHP are at 13.21, followed closely by the MHP on 12.23 and the DYP on 11.68 percent. The results point, unsurprisingly, to another AKP victory and a greatly reduced CHP share in seats. AK too will probably lose a number of seats, as can only be expected after such a crushing majority, but might just be able to continue a single party government. It also seems very likely that there will be more than one party in opposition this time.

If the polls are to be believed, Turkey is looking at five more years of stable government and greater representation of the electorate in parliament. Tell me, where is the danger in that?

As we cross the halfway point in the period to nominate candidates for Turkey's presidency, the number of contenders is still zero
byJamesInTurkey.com 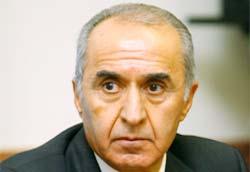 This blog endorses Hikmet Çetin to become the next president of Turkey. Will anyone listen?
byJamesInTurkey.com