It has been 17 years in the making.

On Monday afternoon representatives from Turkey’s two main political parties announced a rare consensus: their candidates in this month’s repeat Istanbul mayoral election will appear together this Sunday to pitch themselves to voters in a live, televised debate.

A brief, six-point statement released this afternoon said the debate between the opposition CHP’s Ekrem İmamoğlu and Binali Yıldırım, the former prime minister and governing AK Party candidate, will take place at 9pm on Sunday 16 June 2019.

It means that the for the first time since Recep Tayyip Erdoğan faced Deniz Baykal in a head-to-head showdown days before the 2002 general election, Turkish viewers can gauge the election candidates on the same screen.

But this will be a challenge for the government’s candidate, who is less telegenic than his youthful, confident opponent.

Of course, any respectable debate needs to be balanced and that depends on three things: the moderator, the broadcaster and the format.

The first, the person who chairs the debate, it clearly important: as the third person appearing on the broadcast, they will be the target of ire from disgruntled supports on both sides. The parties have agreed on İsmail Küçükkaya, an experienced, critical journalist and no government lackey.

Many in the AK Party will be uncomfortable that today’s “compromise” did not involve a moderator friendlier to them; others say it’s a sign of Mr Yıldırım’s confidence in operating outside his comfort zone.

Regardless of any mind-games, Mr Küçükkaya is the host of FOX TV’s respected breakfast programme and has interviewed both Istanbul mayoral candidates in recent weeks. He is a good choice.

The second feature of a robust televised debate in the broadcaster itself.

This will not be Mr Küçükkaya’s FOX but a production effort jointly coordinated by the AK Party and CHP that will film the debate in the Lütfi Kırdar convention centre, in cosmopolitan Şişli, on Istanbul’s European side, and make a clean satellite feed available for anyone to carry.

Having a neutral broadcaster will have been a key CHP demand, considering the vast majority of Turkish channels are close to the government.

The opposition may have found FOX TV itself acceptable – these days it is the only major broadcaster that regularly features opposition voices and does not ignore the existence of the pro-Kurdish HDP – but carrying the FOX logo and feed would have  required monumental powers of persuasion over the legion of pro-government channels that AK Party voters watch. So a clean, neutral feed it is.

The third element of any good televised debate, and most vital, is the format, and here the details are unclear.

The joint AK Party – CHP statement said both candidates would be given “equal questions and equal time”, but it does not elaborate. All we know is what the CHP’s Engin Altay said during today’s live televised announcement: that the moderator who will decide on questions.

Mr Altay also spoke of a crew overseen jointly by both parties will run the technical side of the broadcast.

There could be a debate over the identity of the director, the individual who has the final say on which shots to use during the broadcast, but that is unlikely to be too contentious.

Turkish TV debates tend to make copious use of split screens and this will likely follow that trend: it will make for a less visually interesting spectacle, but most viewers will be more interested in what the candidates have to say.

But will it change anything? The few decent opinion polls out there show Ekrem İmamoğlu has built an edge of around 3-4 percentage points over his rival, a margin wider than his annulled March 31 victory but narrow enough to overturn.

Binali Yıldırım’s strategy appears to be to try and draw back those conservative-minded voters who supported his rival last time around. He’s been trying to do it by emulating Mr İmamoğlu’s down-to-earth campaigning style, meeting people in the streets and having individual conversations with voters.

Unlike the last campaign, Mr Yıldırım is not being overshadowed by his divisive boss, President Recep Tayyip Erdoğan. The badly-concealed rumours from the AK Party camp is that it was Mr Yıldırım himself who pushed to have the televised debate.

One of the reasons for Mr İmamoğlu’s surprise success in the spring was his self-assured nature; he is now also armed with a genuine grievance, that of an election victory taken away from him on a dubious pretext.

Mr Yıldırım, meanwhile, is visibly awkward and less fluid in his rhetoric. This will not be an easy ride for him. 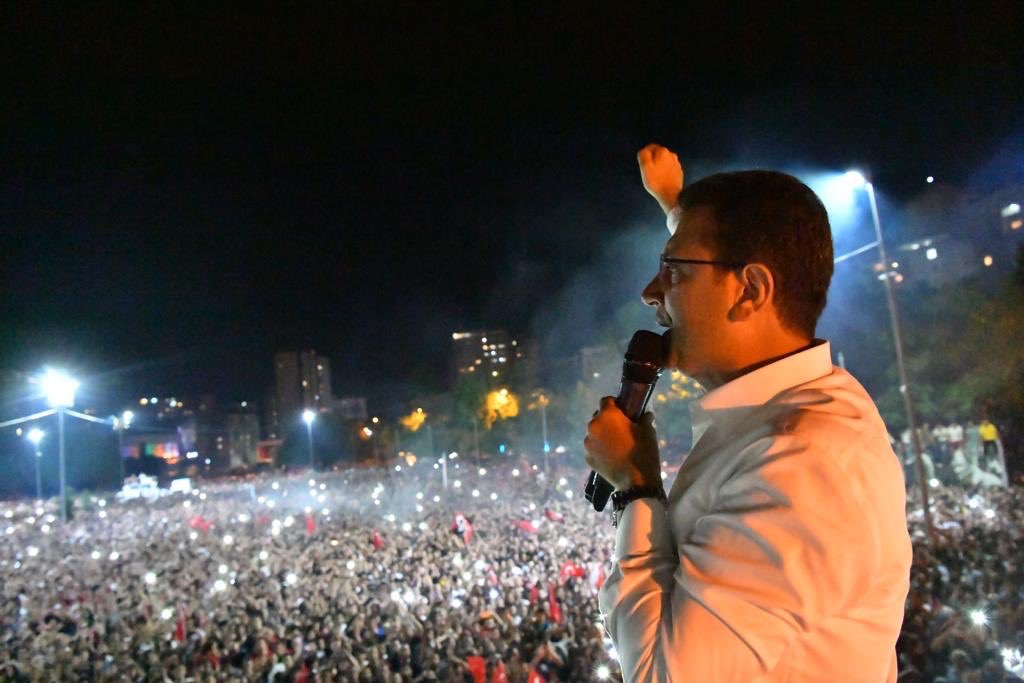 ‪Ekrem İmamoğlu‘s impressive victory has triggered huge expectations for his future. He must now demonstrate he is worthy of them‬
byJamesInTurkey.com
3 shares
3
0
0