Summary of the proposed referendum changes to the Constitutional Court

Summary: The proposed new Constitutional Court would be larger, appointed in part by parliament but largely still by the president, and see its military representation reduced.

Turkey’s present constitution was drafted by the country’s last military government in 1982. It is a flawed document: weak on personal freedoms, power is placed firmly in the hands of the state, and plenty of checks and balances are held by the military. All major political parties agree it should be completely rewritten, but disagree on how to do it.

In Turkey’s civil legal system, the Constitutional Court is the highest authority, handling matters relating to the constitution and frequently called upon to resolve disputes. Since AK came to power in 2002, opposition parties – in particular, the CHP – have used the Court as one avenue to prevent what they see as the government’s gradual dismantling of the secular system. Frequent appeals have made the Court highly influential cover current affairs; the current president, Haşim Kılıç, has been something of a regular in this blog.

As it stands, the Court is made up of 11 permanent and 4 reserve judges. Candidates for membership are nominated in lists of three by the highest level courts in the country, including military ones, with some input from a board of university rectors (see table). The president then appoints one judge from each list of three. 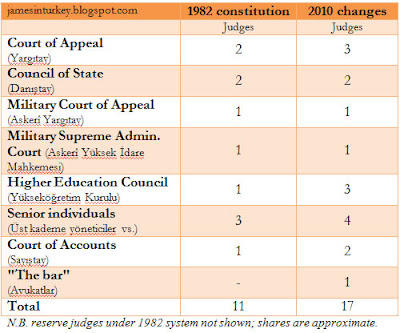 If Sunday’s referendum passes, the current system of appointing four ‘reserve’ judges would be abolished. All would sit on the Court for a single 12-year term, and their number would increase by six to 17 judges. The institutions that elect members to the Constitutional Court would be also altered: the Court of Appeal, for instance, would be allowed to appoint one more member, whereas the Higher Education Council would see its representation tripled.

The changes being put to referendum on Sunday would also loosen the president’s monopoly on appointing members: parliament would approve two members from the Court of Accounts – the highest auditing authority – and one from nominees in the legal profession. All three would be approved by simple majority.

So what’s controversial? The big fuss is over the “senior individuals” category. The constitutional amendment defines these individuals as selected from among “high-grade directors, lawyers, top rank judges and prosecutors, and Constitutional Court rapporteurs who have served for at least five years”. The president would be granted powers to select four individuals that are suited to that description. He does not have to refer to any institution, nor is he required to accept formal advice. It’s effectively a personal appointment for four judges, who would represent a fifth of the enlarged Court.

As the above chart indicates, the “senior individuals” group of judges (coloured orange) wouldn’t see a drastic change in representation if the changes are approved. More significant are changes to the Higher Education Council (teal) and the Court of Accounts (mauve), which increase their representation, while the two military representatives (green and purple) are reduced.

The government says this enlarged court will broaden representation on the highest court in the land.  Writing in Hürriyet last month Kemal Kılıçdaroğlu, CHP leader, argued that the increased representation of institutions largely appointed by the president and cabinet – such as the Higher Education Council and Court of Accounts – is an attempt by the executive to seize control of the legislature.