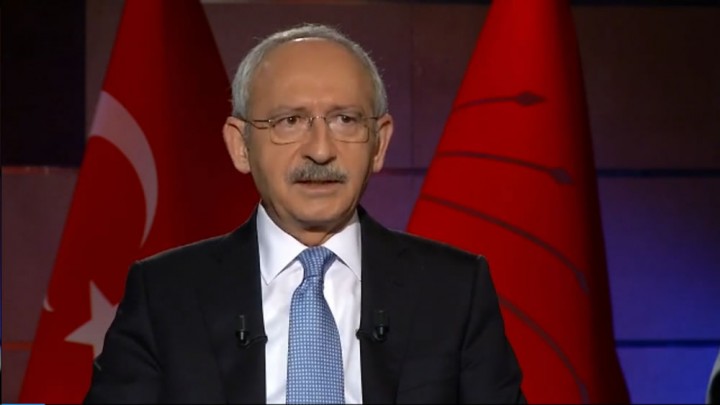 There isn’t really anyone following Turkish politics – this website included – that believes the CHP will win Turkey’s general election on 7 June. Barring an upset of catastrophic proportions, the governing AK Party will take the crown for the fourth successive time.

Party leader Kemal Kılıçdaroğlu knows that his centre-right rivals are too entrenched around the country and the swing he would need is too great for it to happen in a single election cycle. But his interview with Kanal D’s Cüneyt Özdemir last Thursday night was nonetheless remarkable because it showed much the party has matured under his leadership.

Mr Özdemir asked him to list three reasons to vote CHP on 7 June. It was telling that Mr Kılıçdaroğlu did not list the need to remove the AK Party from power as one of them.

Three reasons to opt for the opposition party

The first reason to vote CHP, he said, was the party’s promise not to discriminate between any citizen of any background. The second is the economy, where they pledge to tackle unemployment and the “19 million people in Turkey who live below the poverty line”.

The third is foreign policy, where Turkey has been ostracised from all its neighbours. Turkey desperately needs a “different axis” in its relations with Egypt, Israel, Iraq, Libya and Syria, he said.

He didn’t once mention the state of the present Turkish government.

When Mr Özdemir asked him why, he appeared to say what so many are thinking: “People are tired of the constant arguing and corruption allegations. We want to deal with the people’s problems instead.”

Policies for a new age

A CHP government would secure the services of Kemal Derviş, the former World Bank chief, as minister for the economy. When Turkey’s economy crashed and shrank by 10 percent in 2001, it was the Derviş economic plan that rescued it and, many believe, shielded the country from the most destructive effects of the global economic slowdown later in the decade. His commitment is a real coup.

Then there is Mr Kılıçdaroğlu’s “costed plan” to introduce two extra payments for pensioners every year: one at Ramadan, the other before Kurban Bayramı (Eid al-Fitr).

The idea was swiftly denounced as unfeasible by the AK Party, but it prompted Prime Minister Ahmet Davutoğlu to promise a 100 lira increase to pensions below 1000 lira. It would be paid for in part by a tax on higher earnings designed to help close the divide between rich and poor in Turkey.

There were also proposals to reform education: YÖK, a body that regulates higher education, should be abolished and universities granted autonomy, while all five-year-olds should go to pre-school, raising the years of compulsory education to thirteen.

He first mentioned the AK Party by name nearly halfway through the hour-long interview, when he was talking about a Clean Politics Law that would increase accountability and scrutiny for public officials. Foreign investors were being frightened away from Turkey because of the country’s democratic and judicial deficit, he said, insisting the new law wouldn’t be a witch hunt: “We won’t ask the present government to account for itself. We will only pursue those who have abused their office for personal gain.”

It is to Mr Kılıçdaroğlu’s enormous credit that his party is coming to terms with the AK Party era and developing credible policies to take Turkey forward. For the first time in 16 years, this feels like a left-wing party preparing for government.

How will they get there? Mr Kılıçdaroğlu is aiming to win with 35% of the vote.

35% is extremely ambitious. It would outstrip any result under his leadership or that of his predecessor Deniz Baykal. It’s more than what propelled the AK Party to government (34.3%) in 2002. It’s far more than the DSP’s result in 1999 (22.2%), the last time a left-wing party won a Turkish general election. If he achieves it, it will the CHP’s best result in 38 years.

The CHP would need to significantly strengthen its support in Istanbul, Izmir and the coastal provinces, where it has an established voting base. It would also score a few lucky results in central Anatolia, where centre-left parties struggle. And even then, the CHP would not have enough seats to govern alone.

But the CHP leader doesn’t have the stubborn air of his predecessor, who told everyone he expected to govern alone. Instead, Mr Kılıçdaroğlu used part of his interview to praise coalition governments.

Were 1990s coalitions all that bad?

This isn’t a popular view. Turkey had nine coalition and minority governments between 1991 and 2002; all were shaky, unstable and characterised by intense bickering. The emergence of the single party AK government in 2002 is credited large party to ineptitude of its predecessors.

But Mr Kılıçdaroğlu was keen last week to fight that view. There 65 changes to the constitution during the coalition era, something that requires a 367 supermajority in parliament, he said. And political parties were able to agree on a change as fundamental as abolishing the death penalty. Why not try again?