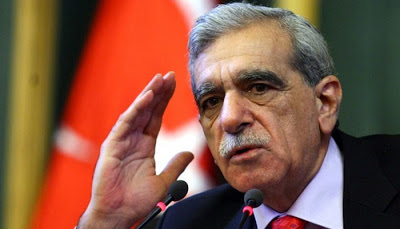 Reverse psychology can be a wonderful thing. Just at Turkey’s prime minister again cast doubt on his country ever having a new, cross-party constitution, the commission charged with writing that document appears to have accelerated its work.

It was on Sunday that Recep Tayyip Erdoğan told reporters following him on his trip in the United States that he was “losing hope” over the constitution-writing process. He continued:

“If there is no solution, we will follow our Plan C and use our own [draft constitution] template. We have 326 MPs and, as you know, it will be a secret ballot, so perhaps a few brave souls will emerge despite their own party’s pressure. If we can get the numbers, we will take it to a referendum.”

The said parliamentary commission is made up of twelve MPs, three each from the governing AK Party and opposition Republican People’s (CHP), Nationalist Movement (MHP) and Peace and Democracy (BDP) parties, and chaired by the speaker, AK Party MP Cemil Çiçek.

The prime minister’s Plan C refers to oft-repeated AK Party threats to team up with the pro-Kurdish BDP and other opposition rebels to reach the magic 367 number, a two-thirds seat majority, which would allow the government to change the constitution unilaterally.

And that might just happen, because the commission’s progress has been torturously slow: members have agreed on just thirty articles in the year to April (the 1982 Constitution the commission hopes to replace, by way of comparison, has 177 articles, and that’s before you count as many as twenty ‘temporary’ addendums).

Things picked up pace a little this past month, with a further ten articles agreed in the ‘Basic rights and freedoms’ category and CHP member Atilla Kart expressing hope that they could add a further fifteen by the end of the month.

But that is still not fast enough and time is running out. The commission’s working mandate has already been extended repeatedly, most recently to 30 June, and Mr Erdoğan is not alone in his frustration at its pedestrian efforts.

The most challenging issue is not time – the mandate can easily be extended beyond the end of June – but content. The commission has proved utterly inept at agreeing constitutional language for some of Turkey’s most contentious issues, be it as religious rights (specifically, how much they extend to non-Muslims) or the right to an education in a mother tongue (and whether Kurdish counts as one).

But it’s not all bad. Two Kurdish MPs, Ahmet Türk and Nazmi Gür, signalled today during their own visit to the United States that the debate over the definition of ‘Turk’ might be shorter than expected.

Turkey’s ethnic minorities have long demanded explicit constitutional protection of their identities and many have objected to the use of ‘Turk’ as an umbrella term that encompasses all ethnicities in the country. Some have gone so far as to call from its removal from the constitution entirely.

Nationalists – particularly those in the MHP – have demanded the opposite, that everyone in the country be considered a Turk, plain and simple. It’s an approach that is abhorrent to many Kurds.

But not all Kurds: Messrs Türk and Gür said they had no objections to the use of ‘Turk’ in the constitution. In fact, they went further.

“We have no demand for terms like Turk, Kurd, Laz or Circassian to be written in the constitution,” Mr Türk said. “[Our opponents] repeatedly say that Turkishness will be lost, but we have no objection to Turkishness being worked into every page. We just want different cultures and identities to be protected, to not be renounced, to have their rights recognised.

“We have no issue with Turkishness or the Turkish people. After all, this is the Republic of Turkey’s constitution. If you feel the need for it, write a section outlining the rights of the Turkish people; just don’t reject diversity.”

This raises expectations that a solution could found along the lines of Turkey’s 1924 constitution, as espoused by President Abdullah Gül.

But solving the ‘Turk’ problem will simply make way for others, most notably Mr Erdoğan’s long-cherished hopes of an executive presidency.