It is one of the worst-kept secrets in Turkey that the occupant of the politically neutral presidency is anything but. Recep Tayyip Erdoğan stopped being a member of the AK Party when he became president last August, but he has done little to disguise his political colours.

The president has kept to the letter of the Turkish constitution by never naming the AK Party in his remarks. But he openly admitted to helping to write the AK Party manifesto and his thinly-veiled attacks on opposition parties and domination of television airtime have prompted four complaints to the electoral authorities, each time unsuccessfully.

It isn’t as if Mr Erdoğan is pretending otherwise: he wants to establish a politicised, executive presidential system in Turkey, and believes his sweeping majority in last year’s election gave him the mandate to argue for one.

However, the fact remains that the office Mr Erdoğan occupies is neutral for the moment, which means that he cannot, for example, appear at campaign rallies.

But that hasn’t stopped him meeting the Turkish public – through that great medium of the ceremonial presidency, ribbon cutting.

Since 7 March, Recep Tayyip Erdoğan has attended 19 ‘mass opening ceremonies’ around Turkey. He was in the Central Anatolian town of Kayseri yesterday, where he officially opened “50 projects worth 458 million lira”. No-one seemed interested in what the projects actually were.

Last Friday he was in Kırıkkale, where there was at least an effort to name what he was opened: the town’s central mosque, officially under construction since 2008. 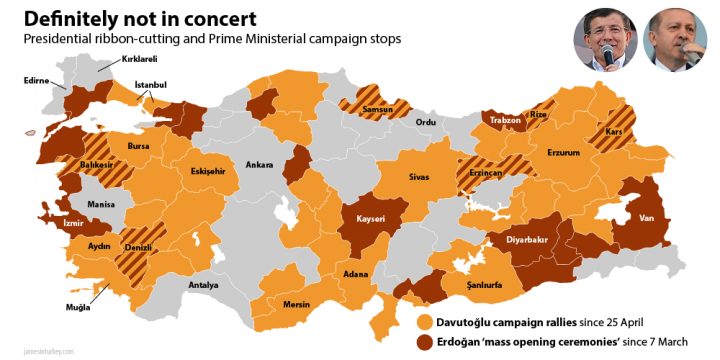 But of course it’s not the facilities that are important; this an opportunity to herd large crowds into the town square, where the president can address them and television can broadcast what he says.

What’s more, very few of Mr Erdoğan’s 19 ceremonies and Mr Davutoğlu’s 43 AK Party rallies have overlapped: as our map above shows, just six provinces have seen both in the election campaign so far.

But we couldn’t say the ceremonies and rallies have been coordinated – could we?