Lessons from the past: Turkey’s parliament could veto Syria action too

“Speaking after the government’s motion [in support of military action] was defeated, the prime minister said: ‘It is not right for us to make this a matter of domestic politics. The democratic process has worked. We will follow developments and do what is necessary.’ He added that despite the narrow margin of defeat, he did not look warmly upon asking parliament to vote again.” 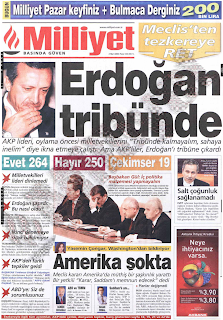 As parliaments around the world debate whether or not to bomb Syria, we have become accustomed to stories like the above in the press. But the prime minister in this quotation is not Britain’s David Cameron or Jordan’s Abdullah Ensour, but Abdullah Gül of Turkey.

On 1 March 2003, Turkish MPs voted on a government motion that would add their country to the growing number of coalition countries preparing to invade Iraq. The motion – the product of a deal between President George W Bush and Recep Tayyip Erdoğan, who had not quite yet become prime minister – allowed for foreign (read: American) troops to be stationed on Turkish soil and foreign aircraft (ditto) to use Turkish bases as part of preparations to invade Iraq from the north. The Bush administration had sweetened the deal with a promise of $6 billion in financial aid.

The national mood was far from united: the army was jittery about Kurdish aspirations in northern Iraq, while nationalists said the region’s ethnic Turcoman population risked being elbowed out of a post-Saddam settlement. Thousands of anti-war protesters echoed colleagues across the West and marched in Istanbul and Ankara against an invasion.

The fledgling AK Party government under temporary prime minister Abdullah Gül was nervous too. The financial offer – essentially, a bribe – was a substantial sum for Turkey, whose economy had crashed and shrunk by 10 percent only two years before. But large swathes of MPs agreed with public opinion, which overwhelmingly opposed war.

The country debated the motion for weeks before the vote was finally called for the first Saturday in March. That evening there were 533 MPs in the chamber, which meant the government needed 267 votes, a majority of those present.
But Turkey’s parliament said no. 19 MPs abstained from voting and 250 rejected the motion, while the number that voted in favour was 264, just three votes short. It was narrow, but it was lost.

It was after this result that Mr Gül made the statement at the beginning of this article. The parallels with last week’s House of Commons vote on Syria are clear.

There were 99 AK Party rebels who joined the Republican People’s Party (CHP) in opposition the 2003 Iraq motion. The government’s margin was not even enough to win a vote of confidence. It is a result that is more striking when we think of the AK Party of today, where parliamentary rebellions are a rare beast.

Of course, Mr Erdoğan runs a far tighter ship now than he did in 2003. Then, his parliamentary party was made up of defectors from the centre-right parties that hopscotched across coalition governments in the 1990s. He has had two opportunities to purge his party lists of detractors ahead of subsequent elections and has done so ruthlessly.

But that is not to say the prime minister’s grip is absolute. Opinion polls show Turkish public opinion is against intervention in Syria, despite mounting anger at the civil war that often spills over into their own country. Conversely, the government has made no secret of its support for a strike on the Assad regime in Syria. Mr Erdoğan would be unwise to overlook David Cameron’s defeat. Relations between the two countries have never been this low
byJamesInTurkey.com

As Turkey continues to digest the results of the referendum, Qriously have released a statement
byJamesInTurkey.com