But never fear! The James in Turkey rolling average of voting intention polls has risen again for the 1 November 2015 election. To see it, all you have to do is click here.

The James in Turkey rolling average recorded opinion polling ahead of the 7 June general election and charted the change in results.

A word of warning: the James in Turkey rolling average was not a scientific measure of Turkish voter intention. It did not balance between pro- and anti-government pollsters and it did not filter pollsters by reliability or data gathering methods.

What it did do was maintain a rolling average of the last five polls published by known Turkish pollsters. It weighed this result down with the previous five polling results, which helped give an idea of the trend in support while protecting the average against extreme outlier results.

Now that the general election is over this page has been retired; the figures above reflect the final projection before the election. To see how it compared with the actual result, see the line chart below. 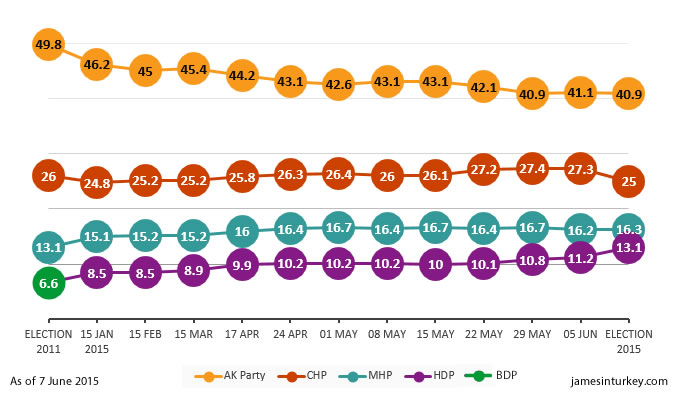