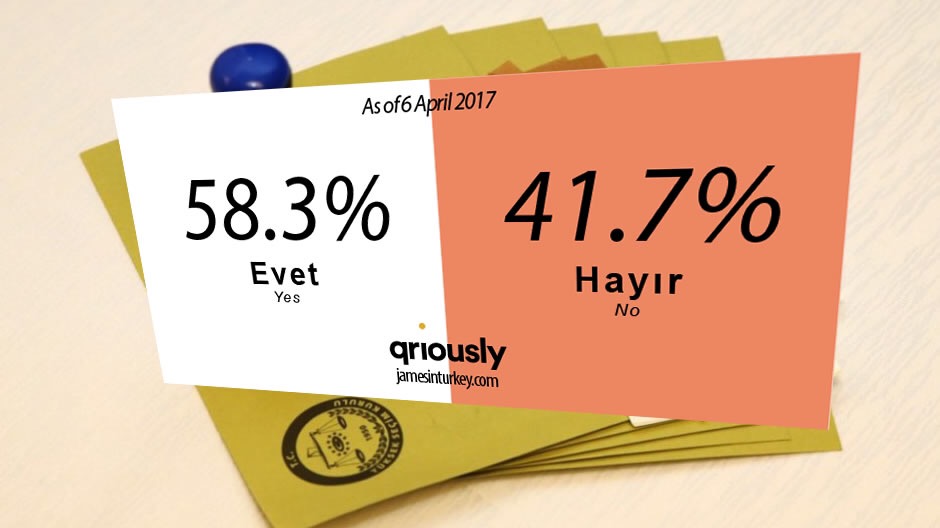 The results of Qriously’s second poll for this website, as others suggest a narrow advantage for Yes

The results of Qriously’s second poll for this website, as others suggest a narrow advantage for Yes

Over the last week more undecided voters in Turkey have opted to vote No rather than Yes in next weekend’s referendum, the second Qriously poll released to this website suggests.

The national poll of smartphone users produced another strong lead for the Yes campaign, which wants to grant sweeping executive powers to the country’s president, Recep Tayyip Erdoğan.

But the gap between the two camps was narrowing, the poll suggested, with Yes falling below the 60 percent threshold and No pushing above 40 percent.

The number of undecided voters remains a significant factor, however: a quarter of those polled said they had not made up their mind. 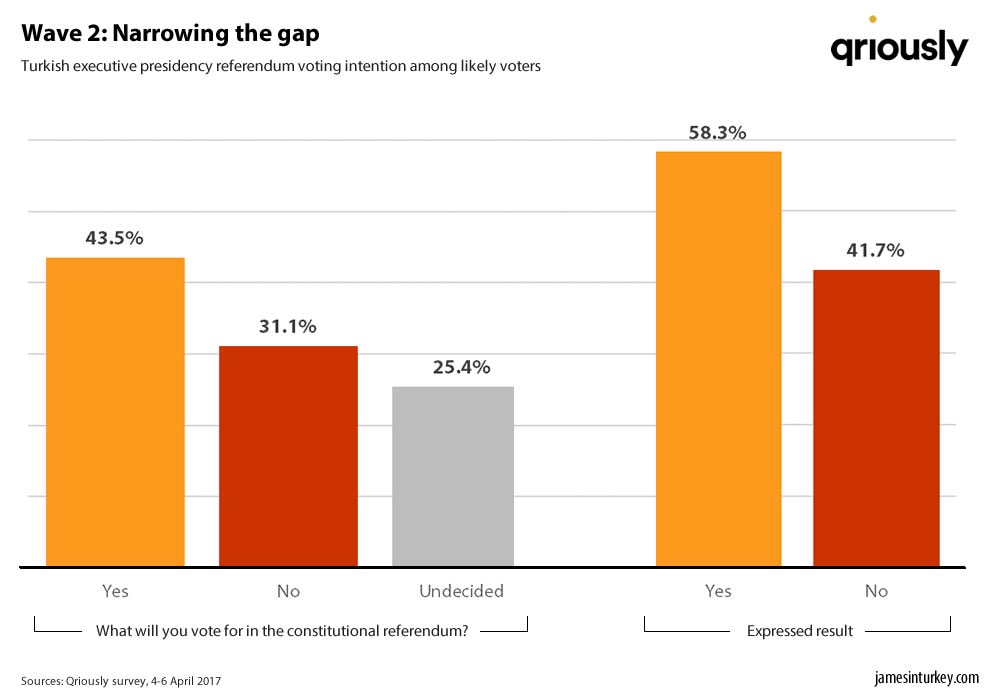 As ever before a Turkish election, the polling picture remains mixed. Qriously’s extremely high Yes result last week – coming in above even the predictions from pro-government pollsters – caused a bit of a stir.

Gezici, a Turkish pollster that is certainly not pro-government, found a lead for the Yes campaign for the first time (although it was Gezici’s first survey since early February).

There have been no other major polls this week, but the message from so many polling company directors appears to be the same: it’s close, very close.

It’s a view echoed by politicians. Mr Erdoğan, for example, declined to discuss specifics during a Kanal 7 interview this week, saying only that Yes was building on its lead.

Ahead, but not in the bag

But the signs are that Yes is creeping ahead.

The likeliest position right now seems to be that the Yes campaign has a statistically significant lead, but it is in the low-to-mid 50s, meaning it is vulnerable to change in the last week of campaigning.

There will be a flurry of polls coming over the next few days, including from Gezici – which will help establish whether its Yes lead was a statistical anomaly or a true change in voter intentions.

Qriously will be doing a final survey this time next week, two days before the referendum.

Plenty more from this site before then.

The poll surveyed 2,593 Turkish-language smartphone users based in Turkey who identified themselves as likely voters between Tuesday 4 – Thursday 6 April 2017. Results were weighted on gender, age and region to be nationally representative of the Turkish adult population based on the latest available census data.