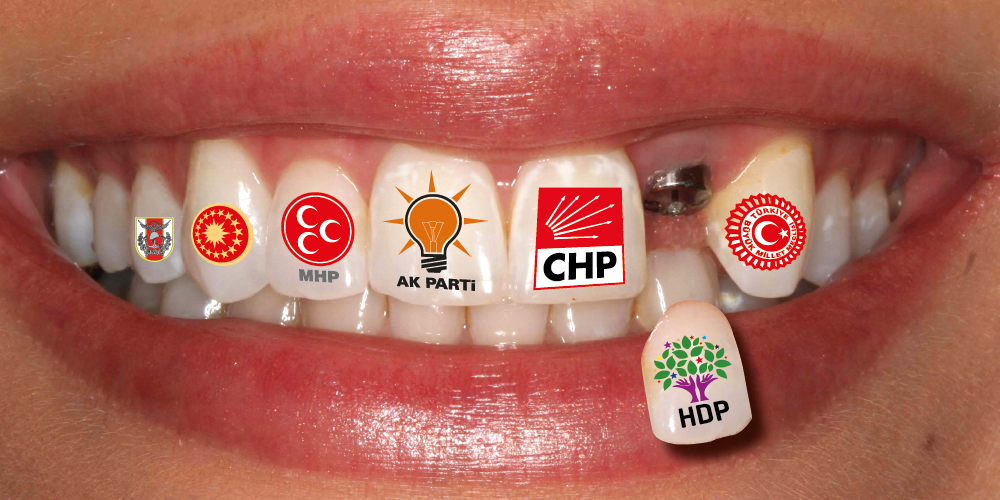 On 16 July, hours after a section of the Turkish Armed Forces attempted to overthrow the country’s democratically elected government, lawmakers from all four major parties gathered in parliament to condemn the act.

In an unprecedented act of unity, the four signed a two-page declaration which acknowledged they had different views but would always be “on the side of the national will”.

They added: “This joint declaration provides the most tangible evidence that nothing in Turkey will be as it was before.”

On 7 August, weeks after a section of the Turkish Armed Forces attempted to overthrow the country’s democratically elected government, millions gathered in an Istanbul public square to reinforce that message of unity.

But some things were as they were before: one of the four parties was not there.

The pro-Kurdish Peoples’ Democratic Party (HDP) had not been invited by the rally organiser, President Recep Tayyip Erdoğan. He said he saw no difference between those loyal to Fethullah Gülen, the Pennsylvania-based cleric held responsible for last month’s coup attempt, and those who fail to distinguish themselves from Kurdish militant groups like the PKK.

“I cannot invite anyone who cooperates with such a group,” Mr Erdoğan said over the weekend. “If I invited them, I could not explain this to the veterans and martyrs.”

The schism between Turkey’s president and the HDP predates the coup attempt; what’s concerning is that the row has survived it.

The HDP is Turkey’s most successful Kurdish party, having won the minimum 10% of votes required to enter parliament in both of last year’s elections.

The party’s success was built a strategy on broadening its appeal beyond Turkey’s Kurdish population to the leftist middle classes and to liberal city types, particularly younger votes.

It worked with resounding success in June 2015, when the party took 80 seats with 13% of the vote, and even carried it over the line five months later when conservative Kurds abandoned it in the face of a worsening security situation.

Pollsters say ongoing clashes between Turkish security forces and Kurdish militant groups in the southeast have eroded the HDP’s support well below the 10% threshold. There is no real way of knowing if this is true, save holding a fresh election.

As a pro-Kurdish outfit, the HDP has never been a conventional Turkish political party and built whole election campaigns around challenging the status quo. But the status quo fought back, attacking its leaders for failing to condemn the PKK’s actions outright or for insisting on using honorifics when referring to Abdullah Öcalan, the jailed PKK leader.

As far as Mr Erdoğan is concerned, it is a black-or-white issue: you are either with the terrorists or against them, he says.

The HDP responds by pointing out the PKK is not its affiliate but a separate organisation. Violence triggered by either side will only damage the prospects for increased Kurdish rights within Turkey, it adds.

The reality is that no internal conflict has ever been resolved by drawing a blunt, indiscriminate barrier down ethnic or religious lines.

That is why the HDP’s absence from post-coup shows of unity is so troubling.

But even more troubling is the fact this incomplete picture of solidarity is being described domestically as a demonstration of political togetherness.

Organisers praised “all” of Turkey’s parties for agreeing to come together to denounce military interventions and most of the press jumped on to the bandwagon.

“My beautiful country,” cooed Hürriyet, the country’s largest circulation daily. “A new Turkey is born” added Milliyet while Haberturk ran with: “One nation”. 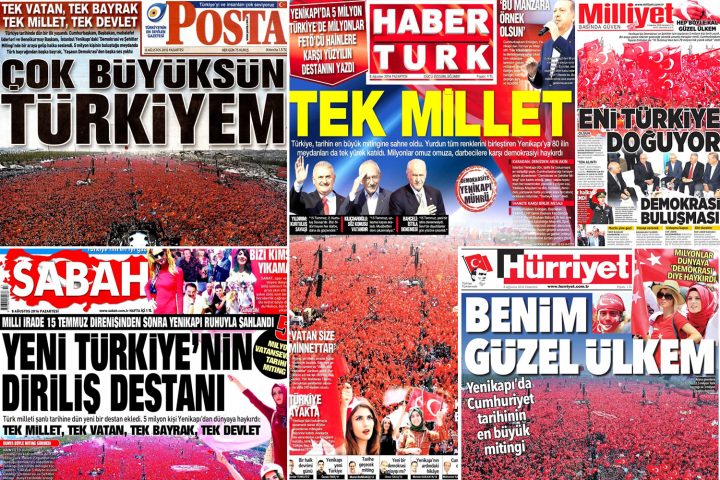 In fact, of the top 20 Turkish newspapers with the highest circulation, all carried images of the crimson-clad millions squeezing into the Istanbul square waving Turkish flags.

All but one carried headlines praising the country’s new-found unity. The exception – Cumhuriyet, an anti-government title – was also the only newspaper to mention the HDP on its cover page. 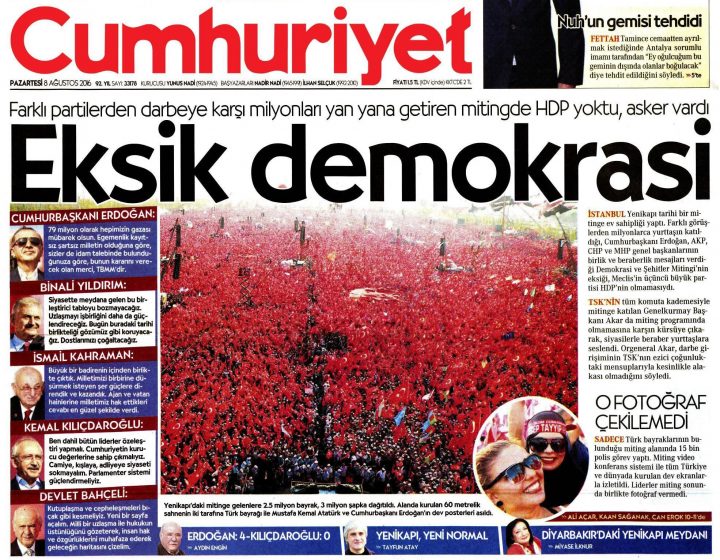