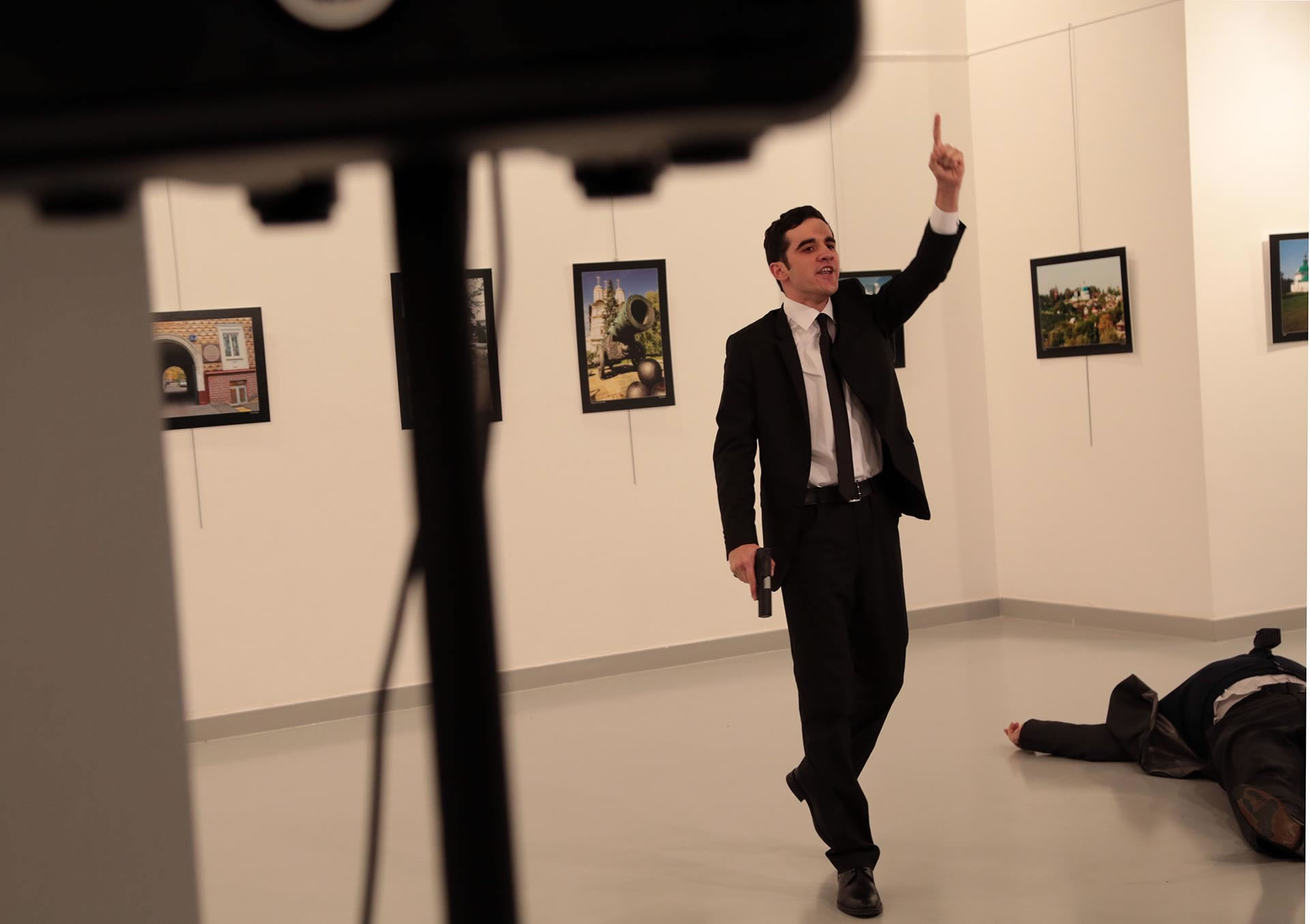 It wasn’t just that a police officer, someone entrusted to protect people, found it within himself to kill. It was also that it was such a calculated attack.

There’s shock in Turkey at all levels, from the presidency down to regular citizens, that someone like riot police officer Mevlüt Mert Altıntaş could be responsible for a political assassination.

But that is precisely what he did as Russian ambassador Andrei Karlov began to speak at the opening of a photography exhibition in downtown Ankara. Altıntaş fired 11 rounds using a Canik pistol; 9 of them hit Mr Karlov, who promptly collapsed.

The aftermath of the murder – chillingly captured on video – gave a clear idea of motive.

“Don’t forget Aleppo, don’t forget Syria,” Altıntaş is seen to bellow at the terrified crowd immediately after firing the rounds.

“Only death will take me from here. Anyone who have a share in this outrage will pay, one by one.”

There is little reason to doubt Altıntaş’s personal motive – his anger at Russia, shared by many people in Turkey, for creating the humanitarian disaster in Aleppo. But the atrocity raises three important issues.

Another parting of the ways?

The first, most immediate question is what impact it will have on Russian-Turkish relations, which have still not fully recovered after last year’s downing of a Russian warplane near the Syrian border.

But the contrast with the aftermath of the plane incident could not be more stark. That incident saw a spike in defensive nationalist rhetoric. Then-Prime Minister Ahmet Davutoğlu and Recep Tayyip Erdoğan, the president, practically competed with one another to claim they personally ordered the plane shot down.

“We warned the pilot ten times,” went the oft-repeated mantra.

This time, the messages of condolence and condemnation were swift and firm. Foreign minister Mevlüt Çavuşoğlu, coincidentally on a flight to Moscow to attend Tuesday’s summit on Syria when news of the attack broke, was quick to appear on Russian television to condemn the assassination. Mr Erdoğan, meanwhile, contacted Russian President Vladimir Putin immediately and was on Turkish television by midnight to reinforce the government’s line that the attack was a “provocation”.

With similar rhetoric coming from Russia and the summit going ahead uninterrupted, any fears of a repeat schism were allayed for now.

Second, this attack reinforces to the outside world what most people in Turkey have known for a year-and-a-half: Turkey’s security situation is worsening by the day.

The AK Party won an election late last year on a promise of delivering security through stable, single-party government.

But by this website’s measure, more than 500 people – nearly one a day – have died and thousands more wounded in attacks across the country since bombers struck a Diyarbakır election rally on 5 June last year.

It was already clear the Turkish government was failing to protect its own citizens. We now know it cannot protect foreign dignitaries either.

But who did it?

The third point is the question of culpability.

The front page of this morning’s Sabah, a pro-government newspaper, seems to have the answer already.

“Friendship assassinated by treacherous FETÖ,” the headline screams. The story goes on to claim the gunman was already on a police grey list for suspected sympathies to the organisation set up by the exiled cleric Fethullah Gülen.

Turkey says Mr Gülen orchestrated this summer’s coup attempt and describes his network of associates and sympathisers as a terrorist organisation. But so far, Turkey has struggled to convince other countries.

Most foreign powers accept there were Gülenists involved in the attempt to topple the government but have adopted a “wait-and-see” approach on whether the man himself actually ordered it. None have classified his followers as terrorists or used the prolific FETÖ label.

The question is whether Russia will be the first to do just that.

Turkey would first need to convince the Russians, including the 18-strong team that arrived in Ankara this morning, of the gunman’s alleged Gülenist ties. It would also need to adequately explain why Altıntaş was not among the thousands of Turkish police officers who have been sacked or arrested since the coup.

If it succeeds, Russia would become a formidable ally in Turkey’s campaign against Mr Gülen.

But it is notable that Mr Erdoğan did not name Mr Gülen or his network in his televised remarks last night. And amid the web of conspiracies, it’s entirely possible that one line of investigation will be ignored: given the level of anger in Turkey at Syria’s plight, is it not at all possible that Altıntaş was working solo?