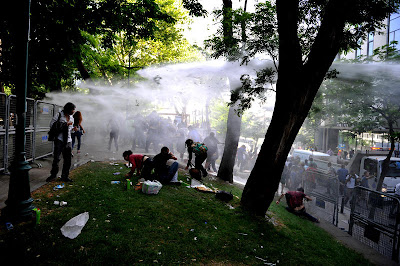 It is hard not to be appalled by the scenes coming out of Taksim’s Gezi Park, where police have swept in yet again to try and evict demonstrators protesting the park’s demolition to make way for a shopping centre.

Police have used pepper spray and water cannon and batons to break the groups up. People wearing gasmasks – strongly suspected to be plainclothes officers – have been pictured setting fire to the demonstrators’ tents. Dozens have been arrested, many others injured. The tear gas is so pungent and pervasive that Istanbul metro services into Taksim have had to be cancelled. And yet a further wave of protests is planned, meeting in Taksim at 7pm this evening.

The armed response is typical of Turkey’s trigger-happy police and should shock no-one. Turkish police has a history of ruthless violence and has never demonstrated much regard for the consequences of its actions. I described them as “thugs above the law” in response to their treatment of women on a Women’s Day demonstration in 2005 and it is clear nothing has changed.

It is the attitude of the ruling AK Party government to the past week’s developments that is alarming because it is characteristic of an administration that has spent too long in power and become too sure of itself.

Prime Minister Recep Tayyip Erdoğan has dismissed the numerous legal challenges launched to the Gezi Park development as a distraction. “There will be no step back,” he has confidently declared. His interior minister said “they had no other choice”. To sustain the British comparison, consider Margaret Thatcher’s response to the Poll Tax riots of March 1990, when dozens were injured in riots that broke out in protest to a change in local government taxation. Then, as now, a stubborn, hawkish prime minister promised to plough on regardless. In Mrs Thatcher’s case, she was out of office by the end of the year.

It is interesting that complete support for the police and its methods is not a universal sentiment among the AK Party’s ranks. The deputy prime minister Bülent Arınç, for example, has not been as vocal as Mr Erdoğan, and even took to Twitter to deny reports that his son or any of his relatives were partners in the proposed shopping mall.

The Gezi Park plans have been public for some years now, but the question of whether the demonstrators are justified in their aims has now become irrelevant. A story about a local redevelopment has been placed firmly into the national consciousness. The more pictures that we see of injured demonstrators being attacked by armoured police officers, the more out of touch Turkey’s prime minister will appear.