Turkey is due to hold three major elections in 36 months; the polls suggest the opoosition won’t win any of them

These are the elections Turkey must hold in the next thirty-six months:

If the glacial work of a 16-member parliamentary committee charged with writing the country’s new constitution ever bears fruit, there will be a referendum to vote on that as well. But the committee was due to report back at the end of 2012 and, well, it hasn’t, so it’s perhaps not worth holding your breath.

While that work continues, the political chattering classes are speculating over electoral scenarios: can the main opposition Republican People’s Party (CHP) score a high profile win against the governing AK Party by, say, winning control of the Istanbul mayoralty? Is it even possible to weaken the AK Party’s punctilious grip on power?

In 2009, the CHP came close to wresting Istanbul away from AK, following a slick campaign led by its candidate, Kemal Kılıçdaroğlu. The difference between the two parties came to 7.5 percentage points, far narrower than any recent national result, and allowed Mr Kılıçdaroğlu to become the only credible contender for the national party’s leadership later that year.

The party now needs a new candidate for Istanbul and the most obvious name is Mustafa Sarıgül, the maverick mayor of the city’s Şişli district and easily the country’s most recognisable local politician. The rumour is that Kadir Topbaş, the current AK mayor, is being lined up for a role in national politics. Up against a fresh-faced AK candidate, Mr Sarıgül could become Istanbul’s first left-wing mayor in 25 years.

For an assessment of the second question, that of the AK Party’s seemingly unending hold on elected office, kindly consider the rough chart below. 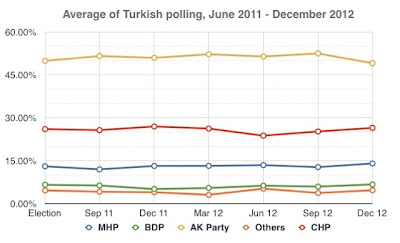 The above shows the June 2011 election result (on the far left) followed by quarterly averages of voting intention data from Genar, Konsensus, MetroPoll, Pollmark and Sonar.

Any half-decent pollster will tell you that a trend of similar results is more valuable than a single, potential outlier result in gauging the public mood. In that vein, it is worth ignoring the specific numbers indicated above and looking just at the gradients.

There are two recent trends are immediately noticeable:

1) After a bump early last year, AK Party support has declined to just below its record 2011 election result;
2) CHP support has shown an increase, but not one proportional to AK’s decline.

Importantly, this chart does not tell us how many Turkish people plan to vote, but don’t know who for. The figures are compiled from the polling companies’ headline results and it is standard Turkish practice to distribute undecided voters among the other parties proportionately. (*)

Bearing this in mind, what does this poll of polls suggest? That we are back to where we were in June 2011: the two polls conducted at the end of last year, if reflected in an election, would deliver a healthy AK majority above 300 seats, a 120-strong CHP opposition and a small Nationalist Movement Party (MHP) contingent of around 50.

So the AK Party juggernaut rolls forward. But how to boot it from government altogether, or at least reduce its majority and force it into a coalition?

There are two main schools of thought on this.

The first centres on the prime minister, Recep Tayyip Erdoğan. The AK Party is built around his personality, the argument goes, and risks fragmentation or utter collapse once he steps down. The second is even simpler: the AK Party occupies the Turkish centre ground and other parties need to dislodge it to win power.

But waiting for Mr Erdoğan to go and seizing upon a power vacuum is a risky game. Far better for AK’s opponents to invest in the second approach.

The trouble is, whatever the opposition’s strategy might be, the polling averages show that it is not working.

* For more on what is standard practice and what is not in Turkish polling, read my post from June last year and Christy Quirk’s comment in particular.

For the first time ever, Turkey’s president has talked about coalitions without trying to disparage them.
byJamesInTurkey.com 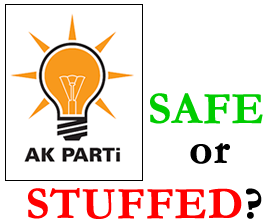 If you look at article 132 of the by-laws that govern Turkey’s ruling AK Party, you will find…
byJamesInTurkey.com