If an election were held in Turkey this Sunday, this blog projects an

over opposition parties in the Turkish Grand National Assembly. 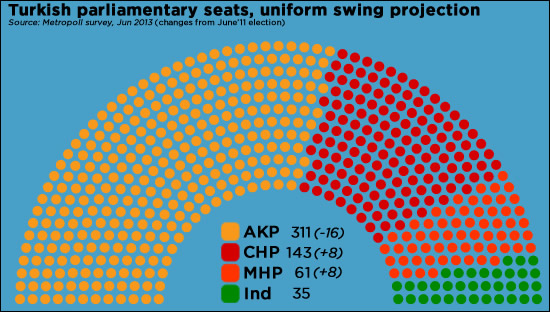 This projection uses the swing from the 2011 general election results found by the latest opinion poll to project how the Turkish Grand National Assembly (TBMM) might look if the results were reflected in an election.
This is an inherently crude calculation because it ignores a number of important factors: regional variation (the change in vote share wouldn’t be identical around the country); Kurdish support (this projection assumes the same 35 independent MPs as in 2011) and local issues, which can produce a result against the national trend.
However, it is still useful because it produces a result based on changes to the last election result in each electoral district. It takes the national change in vote share for each party, runs the D’Hondt calculation method in each of the 84 districts, then adds up all 550 seats.