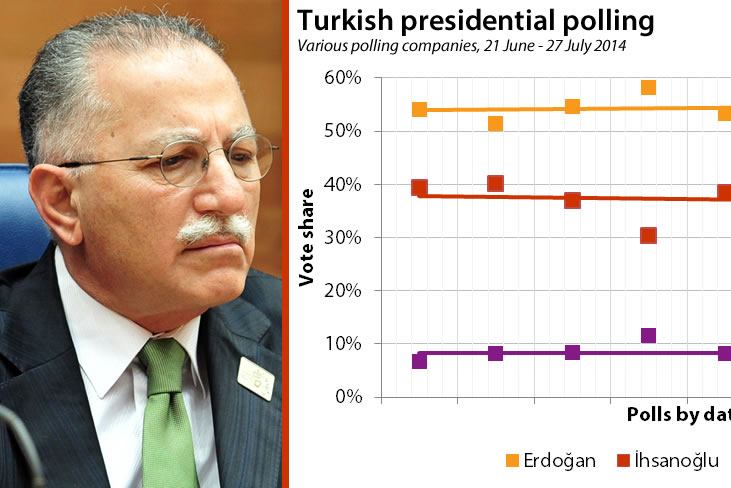 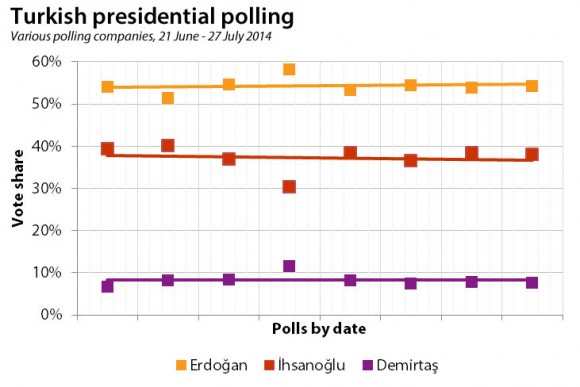 Voting for Turkey’s first popular presidential election began on Saturday at airports and land borders across the country. On Thursday, millions of expatriate voters will begin casting ballots at locations around the world. Domestic voters themselves don’t get their say until next Sunday, 10 August.

With the campaign nearing its final stretch, opinion polls have begun appearing in greater frequency and some with interesting results. Metropoll, for example, reports the number of people who recognised Ekmelledin İhsanoğlu’s name had shot up from 32%, when his candidacy was announced in June, to 72% in mid-July.

It will not surprise many to learn that, as polling day approaches, the number of undecided voters is falling steadily. Metropoll found 5% of CHP and MHP voters have yet to make up their minds, down from 15% a month ago. Meanwhile just 1% of AK Party supporters are undecided.

This all well and good, but what everyone really wants to know is “who will win?” and the answer will not surprise anyone. Even the most anti-government polling companies report a huge lead for Recep Tayyip Erdoğan.

No analyst or pollster realistically predicts an outcome other than an Erdoğan victory; opposition politicians concede the greatest success for their candidate would be to deprive Erdoğan of a 50%+ majority and force a second round of voting on 24 August. But that is looking unlikely.

Regular readers will be familiar with how unreliable I find Turkish polling. The companies that trumpet their results across social media tend to be the ones most reluctant to share raw data or tell us who pays for them. This raises questions over their methods and reliability.

Better are the pollsters who share results only with subscribers – but, of course, we don’t get to see those at all.

Despite the drawbacks, the published results do give us an idea of trends: the extent to which voting choices and indecision has changed as election day draws closer.

Polling trends were particularly helpful ahead of Turkey’s most recent personality contest: the Ankara mayoral race. Here, the much-maligned AK Party candidate, Melih Gökçek, was a shoe-in for re-election. He was much-maligned by his divided opponents and drew on a strong electoral base.

But then the centre-left CHP announced its mayoral candidate, the centre-right Mansur Yavaş. He helped unite the opposition vote in Ankara and produce a photo-finish (and disputed) result.

Unlike the Ankara mayoral contest, all Mr İhsanoğlu has to do is draw enough voters to ensure Mr Erdoğan’s tally falls below the 50% mark. Even in this,though, polling indicates Ekmeleddin İhsanoğlu has failed to reproduce the Yavaş effect.

Metropoll’s results say CHP voters are backing Mr İhsanoğlu in ever greater numbers, but a significant proportion – one in ten – of MHP voters are likely to support Mr Erdoğan over their own party’s candidate.

HOW DIVISIVE IS ERDOĞAN?

The firm’s director Özer Sencar adds their three surveys over the last month have shown a rising trend of support for Mr İhsanoğlu – but that crucially, Mr Erdoğan has already recorded increases in support over the same period.

The conclusion is clear: the Prime Minister of Turkey is not as divisive a figure as the Mayor of Ankara. Recep Tayyip Erdoğan retains strong appeal not just among his party’s supporters but those who voted for other parties as recently as March.