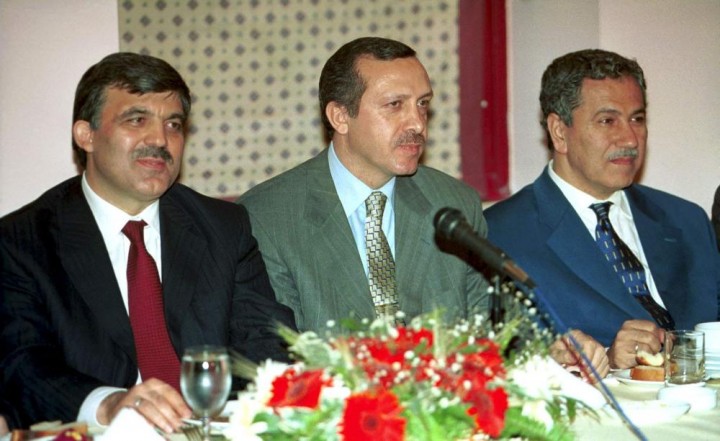 Writing this morning in Haberturk, a broadly pro-government title, Muaharrem Sarıkaya claims plans are afoot to make an AK Party campaign event out of this weekend’s anniversary of the Ottoman conquest of Istanbul.

He writes that President Erdoğan, who is already scheduled to take part, will at one stage appear on top of a campaign bus. Alongside him will be the two men who co-founded the party he pretends he no longer leads: Bülent Arınç, the outgoing deputy prime minister, and Abdullah Gül, who preceded him as president. The trio will hold hands and salute the crowd, harking back to the days of the party’s establishment in 2001.

The spectacle, which would apparently exclude the prime minister Ahmet Davutoğlu, would be an orchestrated attempt to shore up the AK Party.

Shaky in the polls

If true, it would be a remarkable attempt to prevent the AK Party’s slide in the polls – but the report deserves scepticism.

In fairness to Mr Sarıkaya, he provides plenty of it himself. When pressed, one source admits to him that they are still “trying to arrange” the reunion. Mr Gül has kept a low profile since leaving the presidency last year, while Mr Arınç has had plenty of ill-disguised spats with the new president in recent months. A reunion would not just be a simple case of coordinating diaries.

He has often been praised as a moderating influence on the hawkish Recep Tayyip Erdoğan. For example, when four cabinet ministers became the target of corruption allegations in December 2013, it was Mr Gül who ensured one of the implicated number – the EU Affairs minister, Egemen Bağış – was sacked.

Would he do it?

Such an appearance, some say, would not be in the former president’s character. Unlike his successor, Mr Gül went to great lengths to maintain the neutrality of the office: he has not attended a single AK Party campaign event since he was elected eight years ago. And Mr Sarıkaya quotes “a friend known for being close to Gül”, albeit an unnamed one, as rejecting the prospect of a reunion outright.

But Mr Gül never severed ties to his former colleagues entirely. He did not, for example, veto a much-criticised law that allows the government to ban websites without a court order. In the dying days of his presidency Mr Gül did say he would return to politics in the AK Party and after leaving office he took his time before deciding what to do – but he ultimately said he would not be running for parliament in this year’s election.

AK on the slide

The most interesting aspect of Mr Sarıkaya’s column is that it is more evidence of what most of us already know: that Turkey’s governing AK Party is losing support and its leaders are doing everything they can to reverse that trend.

Remember that even Mr Arınç, in his fierce war of words with the Mayor of Ankara earlier this year, said he was tempering his language out of fear of harming the AK Party’s electoral chances.

Can you see him climb on top of that bus for the sake of a fourth term in power?

Writing in Radikal this evening, Murat Yetkin quotes sources close to Mr Gül as saying that the former president will not be attending this weekend’s Istanbul rally. He says the former president wants to maintain his distance from active politics “at this stage” and will maintain his policy of not attending any political meeting or rally since leaving the presidency.

Mr Gül is said to have told his friends he is not deliberately distancing himself from his former AK Party colleagues and wishes them well, but has already told them he will not accept their invitation to attend on 30 May.