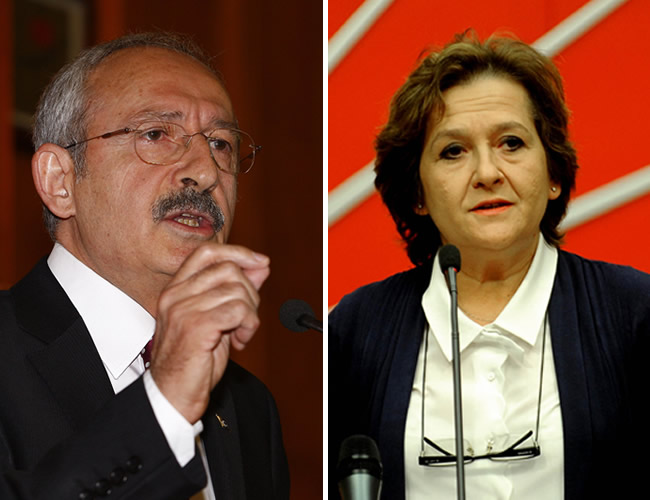 It all began when Birgül Ayman Güler, an two-year Izmir MP for the Republican People’s Party (CHP), lost her temper during a parliamentary debate last Wednesday.

In an extraordinarily angry rant, Ms Güler attacked the governing AK Party and the pro-Kurdish Peace and Democracy Party (BDP) for she called a racial discrimination against Turks as a race.

She decried the commission responsible for writing the country’s new constitution for suggesting that every national be described as a “Citizen of the Republic of Turkey” rather than a “Turkish citizen”. She claimed that defending Turkishness was being described as racism and added:

“You cannot pass Kurdish nationalism off on me as being ‘progressive’ or ‘independent’. You cannot tell me the Turkish nation and the Kurdish people are equal, are equilvalent.”

Her allotted time finished; Ms Güler’s microphone was automatically switched off and she was asked to take her seat.

The comments successfully distracted the press and politicians alike from the recent mini-reshuffle of the cabinet. Gültan Kışanak, one of the BDP co-leaders, described Ms Güler’s comments as “racist and discriminatory”, while the deputy prime minister, barely concealing his glee, spoke of a deepening rift in the CHP.

Ms Güler’s comments, which can be described as ill-advised at best, came at the worst possible time for the Kemal Kılıçdaroğlu. A Metropoll survey conducted at the end of December produced some worrying results for the CHP leader, who assumed his position a little short of three years ago.

Aside from the headline voting intentions, which put the CHP’s share of the vote at the lowest in years, nearly half of Metropoll’s respondents said their confidence in Mr Kılıçdaroğlu had reduced, a proportion higher than any other leader.

* What do you think of party leader X? (Where X was Mr Kılıçdaroğlu, 59% said “Dislike” or “Strongly dislike”)

* In the last year, has your trust in party leader X increased or decreased? (Where X was Mr Kılıçdaroğlu, 46.2% said “decreased”)

In all these negative measures, the CHP or its leader came ahead of its AK Party and MHP rivals. Metropoll also found that CHP voters were most likely to be disillusioned with their leader; most likely to be admiring of Mustafa Sarıgül, the closest thing Mr Kılıçdaroğlu has to a rival; and most likely to support the entry of a new party in Turkish politics.

Of course, we are in the middle of a popular government’s term in office, far from an election , and any opposition party’s poll rating is likely to suffer in such circumstances. But Ms Güler has unhelpfully exposed some truths about Turkey’s main opposition party that many members would have preferred to ignore.

The first is the nature of the party’s membership. The CHP is actually not what it says it is. It defines itself as a centre-left, social democratic outfit, but (to paraphrase an excellent analysis by Murat Yetkin) it is in reality the party of a crowd, not an ideology. This crowd includes more than just social democrats: we’re talking about neo-Kemalists who preach secularism and would do anything to topple the AK Party government, and hard-left sympathisers who want to topple the capitalist system that they say meticulously orchestrated by the United States.

The second truth is that the left-wing of Turkish politics has always been diverse and fragmented and – it must be acknowledged – smaller than the right. The irony about Ms Güler’s comments is that, if the Kurdish issue is ever resolved, most BDP members would probably join the CHP because the two parties operate along very similar ideological lines. But Turkey is overwhelmingly a conservative country and has voted for centre-right parties in far larger numbers – and did so well before the AK Party united that part of the political spectrum.

So there is not one rift in the CHP but many. For some commentators, Mr Kılıçdaroğlu faces a difficult choice that will see at least a small faction split away from his CHP. That faction, for the moment at least, won’t include Ms Güler: she was not asked to resign, and has instead demanded an apology for herself.