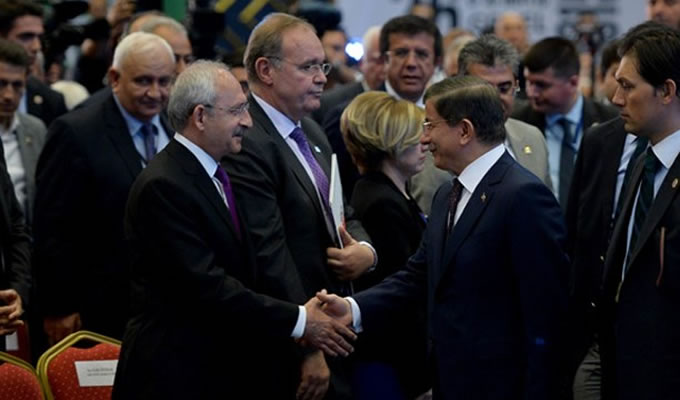 A month and a half after voters in Turkey deprived the AK Party of its governing majority, the AK Party is still in power alone.

Ahmet Davutoğlu’s administration will remain in office until a new government can be formed. That process is slowly, finally, grinding into action.

What we have learned over the past six weeks is that Turkey’s first coalition since 1999 can only be formed by Mr Davutoğlu himself. The CHP, his social democratic opponents, had triumphantly declared on election night that their 25% haul gave them a mandate for power – but other party leaders have made it impossible to exclude the conservative AK Party from Turkey’s next government.

In fact, a right-left grand coalition appears to be the only viable option. Both sides loathe one another, but both stand to benefit hugely from a deal. Both should do everything they can to reach one.

An initial meeting between Mr Davutoğlu and Kemal Kilicdaroğlu, the CHP leader, passed by pleasantly enough. The AK leader later appeared on television speaking about the need for a deal and even talking about changing electoral law to lower the notorious 10% representation threshold. For his part, Mr Kilicdaroğlu has instructed his party members not to criticise the AK Party in public – a clear change in tack from the election campaign.

So far, so good. But polite manners and vague pledges do not a government make. The election campaign was marked by serious policy differences between the top two parties and they won’t be easy to bridge.

Take foreign affairs. The CHP said AK has damaged Turkey’s image around the world and vowed to fix it. It argued the crisis on Turkey’s southern border was a direct consequence of AK’s Syria policy (adopting a surprisingly xenophobic tone in its attitude towards the refugees). It said AK soured relations with regional neighbours like Egypt and Israel and called for urgent repair. But AK – and Mr Davutoğlu, an architect of AK’s foreign policy – will be reluctant to relinquish control of Turkey’s external affairs.

Social policy is also ripe for the fight. The CHP will want to deliver as many of its headline welfare promises, which included extra holiday pensions and a much higher minimum wage. The dispute here is unlikely to be over the giveaways themselves, but who will claim credit for them. The CHP will clearly want to control the ministries responsible for welfare but AK’s has a record of its own when helping lowest earners – and won’t easily relinquish the mantle.

Then there Turkey’s constitutional order and the controversial president himself. The CHP wants to reform electoral law, the judiciary and the presidency, all of which it says have come to serve AK’s interests. But the CHP faithful will probably have to come to terms with Recep Tayyip Erdoğan continuing to occupy both the top job and his $500 million palace – despite Mr Kilicdaroğlu’s promises to hand it over to a local university. That might be hard to stomach.

Those are just some of the possible sticking points. If they are overcome – and an accord is perfectly possible – then the rewards could be great. But that’s a different story.