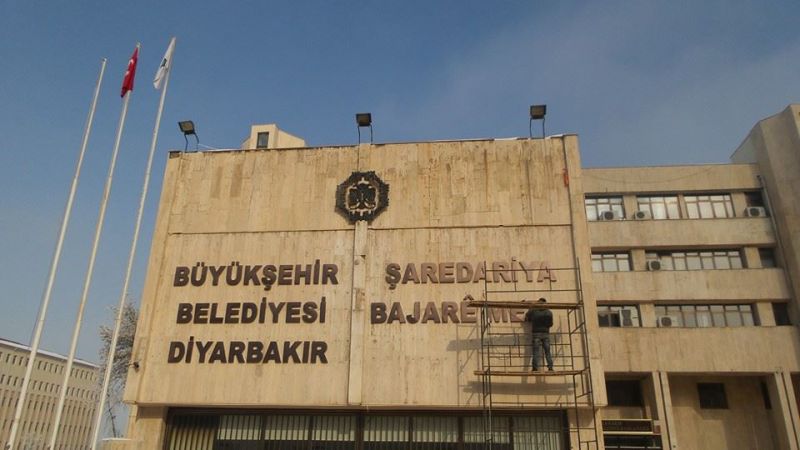 In 2012, AK Party government passed a law that changed local government for three quarters of Turkish residents. People in the biggest cities won’t notice much difference, but there could be electoral ramifications elsewhere. 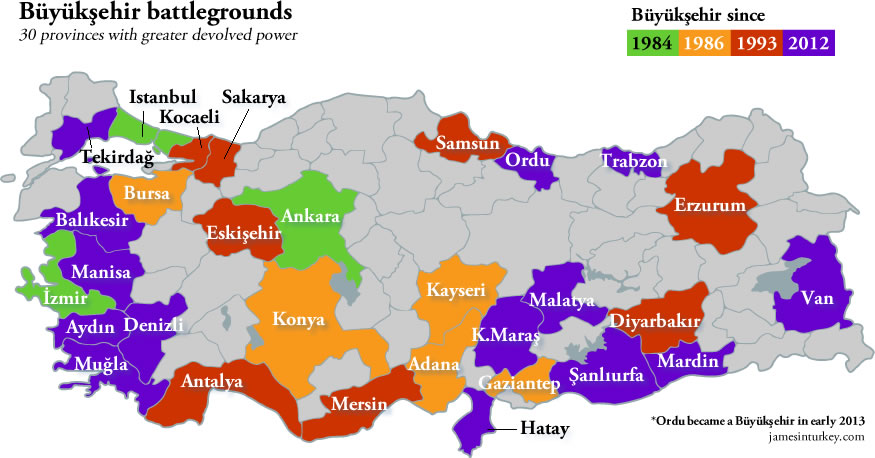 Büyükşehirs are the most devolved form of local government in Turkey. The word literally translates as  “great city” and is a status given to an increasing number of towns across Turkey – 30 of them, with the latest law in 2012. 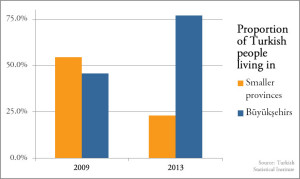 At the last local election there were 16 Büyükşehirs (green, yellow and red on the map above), predominantly in western and central Turkey and accounting for 45.6% of the country’s population.

In 2012, the AK Party government added 14 new cities to the mix (purple), almost doubling the number of Büyükşehir cities and dramatically increasing the proportion of people living in one. Today, more than three quarters of Turkish residents live in a Büyükşehir area.

Only one person – the mayor – is directly elected to the Büyükşehir. He is accountable to an assembly of elected councillors they is drawn from the city’s district councils.

The current mayor at Istanbul‘s Büyükşehir Belediyesi, for example, is Kadir Topbaş, which makes Istanbul an AK Party city as far as the mayoral race is concerned.

But Mr Topbaş answers to an assembly of 300 members, drawn from Istanbul’s 39 districts – places like Beşiktaş, Beyoğlu, Kadıköy and Şişli – and some of these are held by the opposition CHP.

At the last election this meant the vast majority of Istanbul’s 300 Büyükşehir assembly seats were shared between  the AK Party (184 seats) and the CHP (112).

The 2012 law did not just upgrade 14 Turkish towns to “great city” status; it also drastically broadened the powers and reach of Büyükşehir cities.

Until 2012, the boundaries of almost all Büyükşehirs were set- somewhat absurdly – by drawing a large circle on a map with the provincial governor’s office at its centre. Any districts (ilçe) within the circle becomes part of the Büyükşehir. The size of that circle was determined by the size of the city: small one like Eskişehir had a circle radius of 20 kilometres; others like Ankara were as large as 50km.

Circles across the country were abolished in 2012 and a Büyükşehir‘s boundary was defined as the same as its host province – a logistically sensible solution already used in Istanbul and Kocaeli. But this meant enlarging a Büyükşehir’s jurisdiction and, by extension, its voter base. In provinces with concentrated town centres – like Eskişehir and Konya – the revised boundaries will have little electoral effect, as the province’s population is concentrated in and around the main city.

But other provinces – like Balıkesir and Ordu – have populations where rural voters outnumber the urbanites. Four out of every five people in Mardin, a new Büyükşehir in the southeast, live outside the main town. Here, the result on 30 March 2014 will be determined by people in the countryside and that factor alone could swing it from the AK Party to the pro-Kurdish BDP.