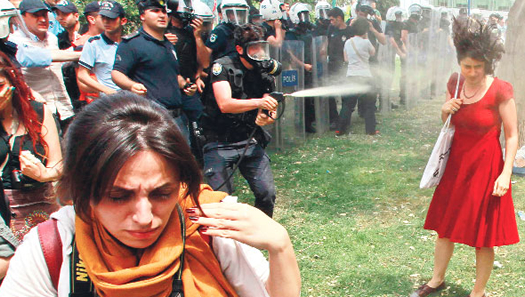 After a disgraceful summer for Turkish democracy, the government does not deserve an Olympic prize.

After a disgraceful summer for Turkish democracy, the government does not deserve an Olympic prize.

On four previous occasions Turkey has tried and failed to bring the Summer Olympics to its largest city. It did not even make the shortlist for the 2012 event, its most recent attempt. The 2020 Games, the host of which will be decided by members of the International Olympic Committee this weekend, could prove different. This could be Istanbul’s year.

The Istanbul candidacy has been a strong one since it was announced two years ago. Bid leader Hasan Arat has been active and enthusiastic: just yesterday, he made a point of invoking the potential of the country’s youth, which is the kind of thing that always goes down well with the IOC. This morning it won the support of The (London) Times, which crooned in an editorial about the “sheer symbolism” of an intercontinental Olympic marathon across the Bosphorus Bridge. It is significant, the paper said, that no Games have ever been held in a Muslim country.

ONE FOR THE RIVALS, PLEASE

But this author dispenses with symbolism and believes that when IOC members assemble in Buenos Aires at 9.45pm Turkish time on Saturday, they should vote for Madrid or Tokyo.

There are three reasons for this.

The first is money. Turkey has borrowed far too much and does not look healthy enough to pay it back. The US dollar soared through the 2 lira barrier last month – an historic high – and there is an alarming dependence on cash from foreign investors, which is a very risky place to be. An analysis of 26 emerging market countries in The Economist this week finds that the country most vulnerable to a sudden stop in this capital is Turkey.

This is hardly a robust foundation for hosting the Olympic Games, the largest sporting event in the world. Istanbul 2020 is by far the most expensive of the three bids and the bid team’s defence – that the money is largely for infrastructure projects that would be funded whether or not Istanbul wins – misses the point. A flight of capital from Turkey would not just destroy a sporting spectacle in 2020; it would likely cancel most of the flagship projects too.

The second reason why the Olympics should go elsewhere is sport, where Turkey’s recent record has been patchy.

There is plenty of success to boast. In the past eleven years, Turkey’s footballers have reached the last four in a World Cup and a European Championship. Basketball’s last world championship in 2010 culminated in an enthralling final showdown in Istanbul between Turkey and the United States, while the women’s volleyball team made history by reaching the Olympics for the first time last year.

But beyond the popular events, Turkish sport suffers from chronic underinvestment – and it shows. In London 2012 Turkey won a paltry two golds and five medals overall. Wrestling and weightlifting were hugely disappointing, and Turkey’s sportsmen and women can boast few Olympic successes beyond the traditional strongholds of athletics and taekwondo. The country’s top woman and man in tennis rank 138th and 180th in the world respectively. Field hockey and rowing barely register in the national consciousness. How well could they actually perform as hosts in 2020?

Of course, good athletes don’t come from thin air and plenty of countries have been in Turkey’s position. Britain had a poor Games in Atlanta in 1996, where it won a single gold medal and came 36th overall; it responded by sharply increasing investment – particularly from the National Lottery – in sport. It was amply rewarded in 2008 and 2012 with top-four medals table finishes. One of the reasons for success was the clever move to fund sport for schoolchildren and raise the athletes of the future over a longer term. No such moves in Turkey.

What is more, Turkish sport has also shown a worrying tendency to cheat. The football league’s 2010-11 season was tainted by a scandal that saw Aziz Yıldırım, the chairman of Fenerbahçe, jailed and convicted on match fixing charges (although he was later released, pending an appeal). His club and Istanbul rivals Beşiktaş were banned from European football competitions this year in connection to the same allegations. And devastatingly, scores of Turkish athletes were suspended this year after testing positive for banned substances.

Granted, not being able to pay for it has not stopped other countries from hosting Games. And it can be argued – as sports minister Suat Kılıç did – that clamping down hard on doping can enhance an Olympic bid rather than detract from it. But Turkey has lost huge amounts of political credibility in the last four months and no longer deserves to be honoured with the greatest show on earth.

The final reason why Turkey’s bid should not win is political. Istanbul was the spark and focus of civil unrest that swept the country this summer.

Supporters of the Istanbul bid point to other Olympic cities tainted by rioting. Paris, a two-time host and perennial bidder for the Games, is home to some notoriously unstable suburbs. London was shaken by endemic unrest barely a year before it hosted the 2012 Games. And Rio de Janeiro too saw widespread and often violent demonstrations this summer: why punish Istanbul?

The answer is that Turkey’s political leadership failed to recognise that some demonstrators could have genuine grievances. The police’s lavish and indiscriminate use of tear gas and rubber bullets against protesters was encouraged by Recep Tayyip Erdoğan, the prime minister. He dismissed suggestions he was out of touch with a section of his people by pointing to the 50% support he commanded at the last election, his third victory in a row.

Elections are not the only democratic check on power and Mr Erdoğan’s failure to acknowledge that demonstrated his democratic adolescence. Observers might be fond of pointing to Turkey as a powerful example of Islam and democracy working together, but this summer’s protests showed that the country’s instinct for autocratic government is still strong, despite the progress of the last fifteen years.

Western leaders responded to the Gezi Park protests by expressing concern but not attacking Mr Erdoğan directly. This was clear realpolitik: he is too important a leader to ostracise at a time of political peril in the Middle East. This weekend, members of the International Olympic Committee have the chance to send the powerful message that Europe and the United States could not: Turkey’s treatment of its citizens this summer was a disgrace. It does not deserve to be rewarded with the Olympic Games.