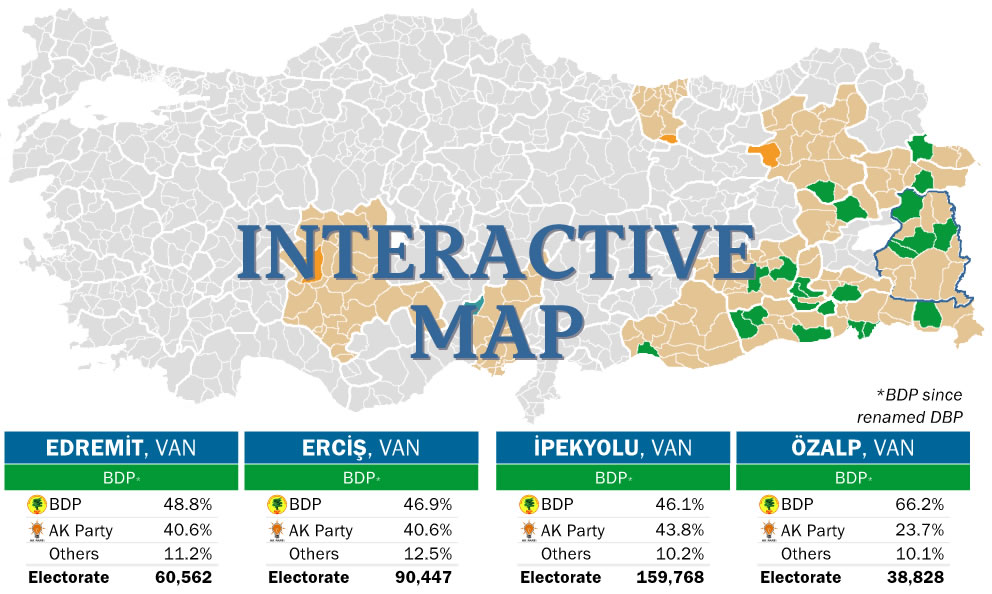 Earlier this month, the Turkish government used state of emergency powers to remove elected officials and appoint administrators to 28 local councils. It did so over what it said was the councils’ links to groups Turkey considers to be terrorist organisations.
The interactive map below details the most recent local election results in 26 of them. Two hyperlocal village councils – in İkiköprü, Batman and Hoşhaber, Iğdır – are not shown on this map. Both were overwhelmingly won in 2014 by the pro-Kurdish BDP, which has since reformed into the regional DBP group.
There have been howls of outrage for two reasons. First, the decision involves unseating democratically-elected councils, the vast majority of them Kurdish, and replacing them with bureaucrats from central government.
Second, it is a sudden volte face on what everyone assumed was government policy. In August the AK Party leadership had been planning a law that would allow it to seize control of errant councils, but dropped them in a much-trumpeted deal with opposition parties. The government has now used state of emergency powers to do precisely the same thing.
The main opposition CHP says the decree law mechanism (known by its Turkish initials KHK, or Kanun Hükmünde Kararname) used by the government is unconstitutional and has promised to challenge it in the constitutional court.
For the AK Party and President Recep Tayyip Erdoğan these are counter-terrorism measures that are well overdue. All these councils supported terrorism, they say: 24 had links to the Kurdish militants of the PKK and four to the coup-plotting Fethullah Gülen network.
It is another clear sign that Turkey’s government does not distinguish between the two.
Tagged asak partyhdpMHPstate of emergencyturkish local politics