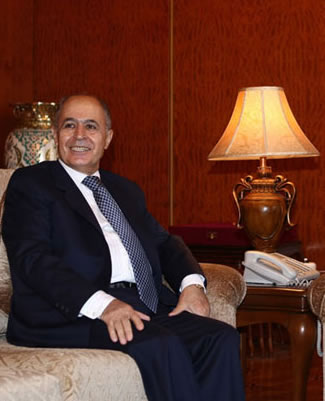 Grumpy Ahmet Necdet Sezer is delighted to be leaving office

Grumpy Ahmet Necdet Sezer is delighted to be leaving office

Day two thousand, six hundred and fifty-nine must have been Ahmet Necdet Sezer’s happiest as President of Turkey. Seeing as the last of his packing was done months ago, he didn’t have very much to do except visit the new parliament speaker, Köksal Toptan, on the final leg of his farewell tour. He turned up in the early afternoon, met Mr Toptan at the door and went inside for a twenty minute chat. Predictably, the outgoing president was given a gift: a porcelain plate, hand-made as one of Turkey’s finest, was handed over in front of an army of photographers. Rather less predictably, Mr Sezer grinned. He did. Honest. It was a wide grin too. It seems one of the country’s grumpiest men can have a spark of fun, too.

At 65, Mr Sezer is the youngest president to leave the post since İsmet İnönü. He was also the first non-partisan, non-military president, having been Turkey’s chief justice before becoming the “consensus candidate” to succeed Süleyman Demirel. It was unprecedented stuff: he was jointly nominated not just by the Prime Minister, Bülent Ecevit, and the leaders of the three-party coalition, but also the leaders of both main opposition parties.

But Mr Sezer was not first choice – Ecevit had wanted to extend Mr Demirel’s term by three years – and there were eight other candidates for the job, which meant the consensus man was only elected in the third round. But he took the job with nerve. “I shall do all I can,” he said after his election, “to protect national unity, defend secularism and achieve the distribution of wealth.” It was that third aim that was to get him into trouble.

On February 19th, 2001, Mr Sezer used a meeting of the National Security Council to hold Ecevit to account on wealth distribution. The prime minister’s coalition was looking shaky, and an IMF recovery plan to rid Turkey of chronic inflation and economic instability was not going well. Mr Sezer accused Ecevit of not pulling his weight to tackle corruption and, in an infamous heated moment, threw a copy of the constitution towards the prime minister, one presumes for his inspection. Ecevit stormed out, slamming the door behind him.

Analysts later said it was not what Mr Sezer said that had infuriated Ecevit, it was the way he said it. Either way, it caused an economic crisis that shrunk the Turkish economy by a mammoth 10 percent. The Central Bank sold 5 billon dollars on the day of the argument alone in an attempt to buoy a plunging market. It didn’t work; thousands lost their jobs, hundreds of thousands saw their savings erased. Ecevit’s career never recovered. He and his coalition partners were all voted out of parliament the following year in elections that swept Recep Tayyip Erdoğan’s religious AK party to power. President Sezer was all that was left of the old guard.

In the years that followed, Mr Sezer vetoed laws, ammendments and appointments by the AK government – more than any of his predecessors. Far from the man who helped bring crisis, among secuarlists he became the stalwart traditionalist force against a new wave of political Islam. For AK supporters, he was a stubborn, inflexible bureaucrat. He became particularly popular among supporters of the Republican People’s Party (CHP), with many canvassing him to replace Deniz Baykal. He has always dismissed those calls, but he has made no secret of his dislike of Mr Erdoğan’s politics, and admitted to being surprised and dissatifised with last month’s election result.

Ahmet Necdet Sezer was a boring, unwavering, unidealistic president. You could say he treated the post like a judge – he used the state’s founding principles as his guide, and didn’t stray far from them. Some might call that blind progress, ignoring developments around you, but few could argue Mr Sezer didn’t play by the book.

His was the slimline presidency – he was never one for pomp and ceremony, he always returned a part of his presidential budget unspent at the end of the year, and even during the AK years he was rarely outspoken in day-to-day politics. He would insist his convoy stopped at red traffic lights. He would leave the confines of the presidential palace to go shopping. Even his darkest hour, the 2001 crisis, was triggered by his urge to make life better for the ordinary Turk. He gave the impression of a good, modest man, a man who assumed the presidency not because of the glamour but because he genuinely thought it a service to his country.

This presidency has had a timely ending. Turkey is richer, more stable and more mature than it was when Mr Sezer was sworn in seven years and three weeks ago. It now needs the energy of a stimulating president to tackle the country’s most ingrained issues.

They say good men do not necessarily make good presidents; Ahmet Necdet Sezer was a boring president, but he was still a good one. His stolidness was just the palpable kind of honesty a country of sleaze and corruption needed. And his beaming smiles today show that even the most adamant judge can hang his robes and go home. His work is done.