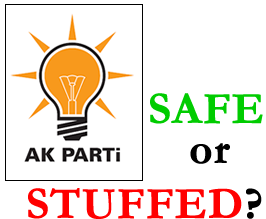 If you look at article 132 of the by-laws that govern Turkey’s ruling AK Party, you will find a clause that is sensible and democratic. It imposes a strict three term limit on MPs and mayors, presumably to ensure youth and vigour and prevent cults of personality among the party’s ranks.

Mayors and members of parliament who become a candidate from an AK Party list and are subsequently elected can be a candidate for a maximum three terms.

But this was written when the party was established, before its 2002 election victory that surprised everyone, including the founders, and well before the 2007 and 2011 elections, where the victories were even greater.

Party leader Recep Tayyip Erdoğan has come to adopt a looser interpretation of article 132. The three term limit remains, he says, but it’s perfectly possible to take a break for one term and then return. It is also possible for third term MPs to go off and spend a term as mayor of Istanbul, for example, and then return to parliament afterwards.

Another flaw with the article is that the big man himself is affected by it. The prime minister has repeatedly declared he will not serve a fourth term; rather than modify his own party’s by-laws, he would rather change the constitution to make himself a French-style president with executive powers.

Mr Erdoğan’s ill-disguised ambitions do a pretty good job of disguising the effect of the three-term rule on the rest of his cabinet, however. 16 ministers – that’s nearly two-thirds of his cabinet – will be unable to stand as MPs at the next general election, which under current rules is due for 2015.

Rumours abound on who, particularly among the cabinet’s baby boomers, will retire and who will conveniently find work leading a largish council for three or four years. We’ll consider some of those in another entry; for now, here is our guide to who’s stuffed and who’s safe.