The week’s events in the Mediterranean have clouded many things, including an interesting set of opinion polls published by SONAR at the end of last month. Here are the topline percentages for voting intention, with changes from the company’s last published survey in January:

This poll represents the first time in eight years that the governing AK Party has lost the lead in SONAR polling. The source of the CHP bounce is, of course, largely the rise of Mr Kılıçdaroğlu to the leadership: the fieldwork was done in the five days immediately following his election. A new face at the head of a major political party means increased media coverage at the expense of the governing party, and a general sense of change and optimism.

On a crude and entirely unscientific swing, assuming the 10 percent electoral threshold is not lowered and the pro-Kurdish BDP’s 20 MPs decide to run again as independents, this poll would roughly produce the following seat distribution in parliament (with changes from the present situation):

Were a general election to produce this result, this would be firm coalition territory for Turkey. CHP and AK would be near equals in parliament, both requiring the support of the nationalist MHP to form a government. It’s disconcertingly reminiscent of the 1970s, when CHP and the centre-right Justice Party were near-equal forces, and wholly dependent on smaller parties to govern. Regardless, it’s a striking change from the last opinion poll I looked at in January, which produced a clear AK lead just short of an overall majority.

SONAR are making much of the fact that it is the first time their polling has shown a CHP lead for eight years. While that is a remarkable achievement, there are some points of caution:

1. AK has also recorded an increase in support, albeit considerably smaller than that of CHP.

2. Voters are becoming polarised. It appears the anti-government vote – supporters of the MHP, the BDP and the centre-right DP – is rallying behind CHP, while the CHP’s recent prominence has persuaded some supporters of the strongly Islamist SP to turn to the AK Party.

3. The difference between CHP and AK – 1.4% – is well within SONAR’s margin of error of 1.7%, which suggests CHP’s lead is still extremely slim, and that the poll could have produced a narrow AK Party lead.

There are other anomalies too. Support for the centre-left DSP has increased at a time when the centre-left appeared to be collecting around Mr Kılıçdaroğlu. Rahşan Ecevit, the DSP’s founder, former stalwart and wife of the late prime minister Bülent, is among those to shift her loyalties to the CHP, which is why the DSP increase is interesting.

The large increase in support for other parties is partly down to SONAR no longer publishing the results for the far-right Great Union Party (BBP, 2.2% in January) separately.

Most important, however, is that this poll was conducted in its entirety before Israel stormed that Turkish ship carrying aid to Gaza. The response of Recep Tayyip Erdoğan, the prime minister, has been strongly endorsed by many Turks. As in most cases of international crisis, the opposition – including Mr Kılıçdaroğlu – have been sidelined into issuing mild statements of support. It will be interesting to see how that reflects into the next opinion poll.

SONAR interviewed 3000 people in towns and villages in 16 Turkish provinces between 24 and 27 May 2010. The full survey can be found here. 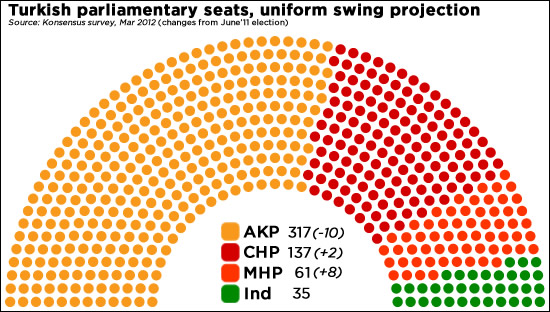