Turkey’s official gazette, the Resmi Gazete, has long been a harbinger of doom. Since last year’s coup and the declaration of a state of emergency, its pages have been used to announce the closure of newspapers, the seizure of companies and property, and the sacking of thousands of people from jobs in the civil service or judiciary.

One list published last Monday contained an innovation. For the first time, the government announced the names of 130 people based abroad who would lose their Turkish citizenship if they do not return to face justice in Turkey within three months.

The 130 names are listed alongside a wealth of personal information – their national identity numbers, dates and places of birth and their parents’ names – but the specific charges they face are not.

Resmi Gazete simply states they are wanted in connection to infringements of articles 302 and 309-315 of the Turkish penal code. These generally cover crimes against the constitutional order, including “assassination and actual attack on the president”, crimes against the government and legislature, and “armed resistance” – among others.

This website has analysed the 130 names published in the Resmi Gazete last Monday and identified approximately two-thirds of them.

Of these, a quarter are former academics based in Turkey or still working for institutions abroad. Another quarter are names already listed on the interior ministry’s listed of wanted terrorists.

Nearly one-third of the names this website identified are prominent businessmen whose assets have already been seized or in the process of being taken away from them.

Just 11% of the names we found were Kurdish, leading to the conclusion that this is mostly – but not entirely – an anti-Gülenist exercise.

The notorious cleric in self-imposed exile in Pennsylvania is clearly the headline name among the 130 people whose return has been demanded. The Turkish government holds him directly responsible for last year’s coup attempt but, for reasons that aren’t clear, his is the 91st name to be listed.

Stripping Fetullah Gülen of his citizenship if he fails to return to Turkey by September 2017 might seem like a bold move, but the move would render him stateless, making it even harder for him to be extradited.

Tuğba Hezer Öztürk and Faysal Sarıyıldız, two MPs from the pro-Kurdish HDP, are also listed. Along with the vast majority of the HDP’s 59-member cohort, they have had charges against their name since their parliamentary immunity was lifted before last year’s coup. Ms Öztürk and Mr Sarıyıldız have both been abroad and have not returned to Turkey since then and – judicially speaking – remain at large.

Entry number 4 on the Resmi Gazete list is 37-year-old Haydar Kırkan, who was born in the pious central Anatolian city of Konya and has long been wanted for his affiliations to the so-called Islamic State group.

His name is on the interior ministry’s website of wanted terrorists – he’s on the “green list”, the third of five colour-coded categories of people Turkey wants.

Only trouble is, he’s already dead. The Pentagon confirmed on 2 November that he was the target of a US airstrike in the Syrian province of Marib in October and was killed.

That Kırkan is still listed as “wanted” on an obscure Turkish government website might be an oversight. But the Resmi Gazete list was published nearly eight months after he was killed. It makes you wonder how robustly the remaining 129 names were screened.

Kırkan is one 17 names listed as being born in Konya, the birthplace of more suspects than any other. This is perhaps not a coincidence: this pious city has for centuries been a centre for Sufi mysticism, the branch of Islam so often associated with Fethullah Gülen. 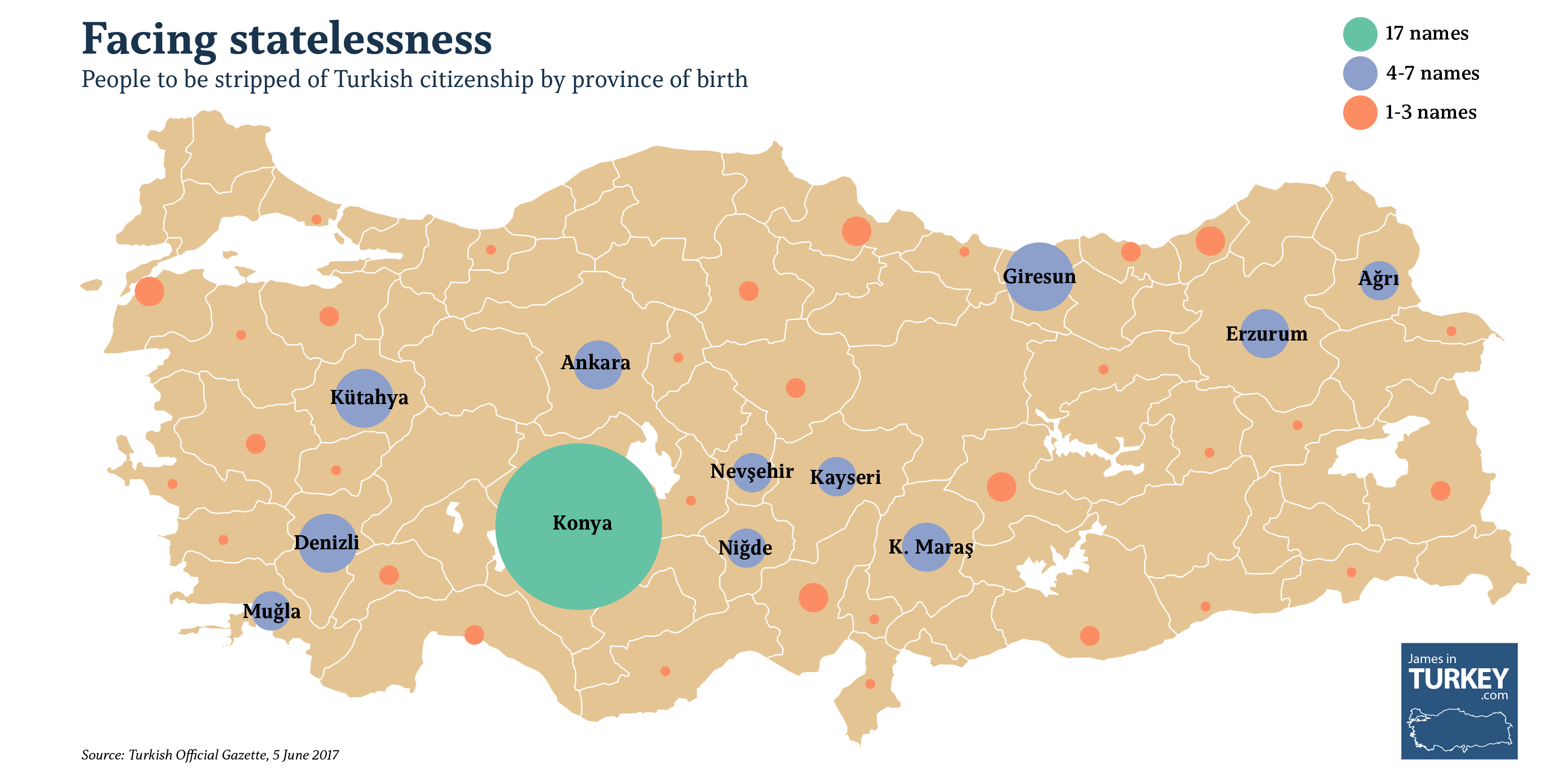 Place of birth, of course, does not necessarily indicate the place where the suspect grew up. But it’s striking that the vast majority of those wanted by the Turkish government came from central Anatolian and Black Sea provinces – traditionally associated with conservative and pious populations.

People aged in their late 30s and early 40s fit the demographic so often associated with Gülen operatives: individuals who have completed formal university education and will be old enough to have become middle-ranking judges or civil servants.

That is precisely the demographic that, the Turkish government alleges, infiltrated the country’s institutions to create a so-called “parallel state”.

This article was updated on Tuesday 5 September 2017 to fix the link in the second paragraph that was pointing to the wrong issue of the Official Gazette.